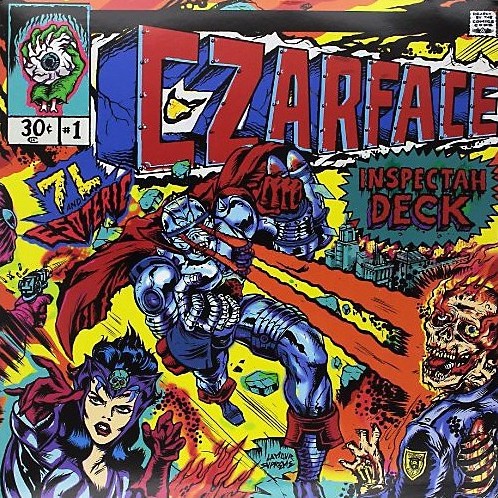 B3 Marvel Team Up

In music, timing is everything. When soon-to-be-renowned Boston hip-hop duo 7L & Esoteric collaborated with the Wu-Tang Clan's Inspectah Deck on the title track to 7L&E’s debut EP "Speaking Real Words" in 1999, the timing was perfect. The upstart duo was building a serious buzz on the East Coast and beyond, while Deck was still winning praise for his gold-selling solo disc "Uncontrolled Substance". As flashy pop-oriented rap was pumped on commercial radio stations, their natural chemistry and simpatico skills shone as a beacon to real hip-hop fans, a base of listeners who were soon asking about their next musical summit.

14 years later, the hunger for sharp lyrics and head-snapping beats hasn't dissipated. In the face of the ever-worsening status quo of watered-down and vapid radio rap songs, the call for something real has only gotten stronger, and once again the time is right for a call to action – for someone or something to come in and send wack rappers running for the hills in fear. Enter "Czarface", the upcoming, uncompromising full-length album from Inspectah Deck and 7L & Esoteric.

Aside from one track blessed by the almighty DJ Premier, production on "Czarface" belongs exclusively to DJ 7L, who provides the musical backbone which holds the album together. His ability to craft a hip-hop sound that's current and exciting with a classic feel left Deck impressed: “This is one of the first albums I've heard in a while that gives you so many different feels. You hear the ‘80s hip-hop style, ‘80s R&B and rock combined with what's going on now. That’s creating something new, in my opinion.”