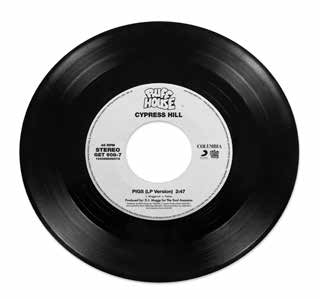 Cypress Hill, Pigs / How I Could Just Kill A Man

A SIDE
Pigs (LP Version)

B SIDE
How I Could Just Kill A Man

To Commemorate The 30 Year Anniversary Of Cypress Hill, Get On Down Presents A Series Of 7 Inch Singles Of Every Cut From One Of The Most Legendary Debuts Of All Time.
When Cypress Hill came with their debut self-titled album 30 years ago, they made an immediate spark that captivated the Hip Hop audience, critics, and then the world. Led by B-Real with his nasal, singsong delivery, and Sen Dog to play the perfect hypeman, Cypress’ debut fueled tales of revenge, revolution, recreational drug use, gangbanging, and cultural pride.
Like Public Enemy before them, the production was also a key factor in what made this debut so groundbreaking. DJ Muggs was able to craft a blueprint that would change Hip Hop production with his innovative stoned-out beats. Cuts like "How I Could Just Kill a Man", "Pigs", "Stoned is the Way of the Walk" and "Hand on the Pump" made Cypress Hill an instant classic. Since its release, the album has won acclaim as one of Rolling Stone's Essential Recordings of the 90s and
Top 100 Best Rap Albums by The Source Magazine.