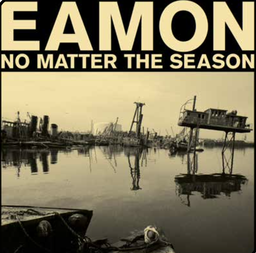 Eamon No Matter The Season

A masterful mix of timeless American soul with vintage 1970s African samples in a most rewarding way – musical traveler Eamon teams with production duo Likeminds for No Matter The Season, his second album for Now-Again. EAMON NO MATTER THE SEASON “I’ve been singing since I was a tike, promoters used to call me ‘the boy wonder’, but with this record it felt new, almost like I was singing every note as if my life depended on it,” says Eamon from his home in Southern California, a far cry from his native Staten Island, New York City. But you wouldn’t know his birthplace from the way he sings, especially on No Matter The Season, where Eamon put a new spin on vintage samples from the Now-Again catalog, crafting beats from various African rhythms such as Amanaz’s Zamrock, the Hygrades Nigerian funk, and Ayalew Mesfin’s Ethiopian tezetas. Shortly after the release of his last Now-Again project, Captive Thoughts, he began working with the production duo on two original compositions that appear on No Matter The Season. But as time went on, he came upon the idea of completing the album by sending the duo samples from the Now-Again catalog to work with. Which were expanded upon with a multitude of live instruments. “There was something special about combing through the African records at Now-Again,” Eamon reflects. “I had never heard the variety of funk and soul that existed in places like Lagos and Addis Ababa, it was like a history lesson in Rhythm & Blues. I was hearing the godfathers of the movement here in the US. I wanted to pay my respect to that lineage. Since singing in my father’s doo-wop group as a kid, I’ve always used music from the past to create and express something new in the present. But to be able to do that across continents and get back to the roots…that was really impactful for me.” Likeminds, helmed by Chris Soper and Jesse Singer, two East Coast transplants to LA who are as comfortable chopping up samples on an MPC as they are playing classic instruments, using vintage microphones, or recording to tape, offer up what could be described as a West Coast spin on the revivalist soul sound championed by Daptone Records. “For sure, the album is soaked in an old school feel, but to still tap into the depths of my soul today is always the end goal,” Eamon states. All but two tracks are based on Now-Again samples, using the classic rhythms as accompaniment to showcase Eamon’s emotional singing style that is still as honest and raw as when he was a 16, singing about heartbreak. The end result, No Matter the Season, is a celebration of the musical relationship between Africa and America and the thrilling soul music that relationship has spawned since the 60s and 70s. “My hope is people know that I’m not leaving anything on the table in this chapter of my career,” Eamon reflects. “Only thing I can do is pour my heart out on every single line. Even though I’m writing and screaming to the heavens about my joy, my pain, my love…these are songs for everyone, everywhere, anytime. You’re gonna walk away feeling something. This is why I titled the album No Matter The Season.”