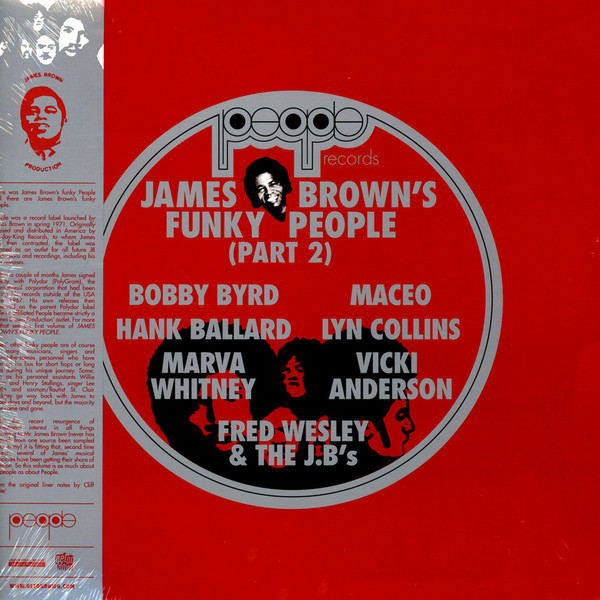 SOLD OUT
2LP -GET ON DOWN

A1 –Bobby Byrd I Know You Got Soul

A2 –Hank Ballard & The Midnight Lovers From The Love Side

B1 –Lyn Collins Put It On The Line

B3 –Maceo & The Macks Cross The Track (We Better Go Back)

D1 –Lyn Collins Do Your Thing

D2 –Fred Wesley & The JB's I'm Paying Taxes, What Am I Buying

As music fans know, James Brown wasnt just the greatest funk and soul singer the world has ever seen – he was also a musical visionary and businessman, who surrounded himself with geniuses who made him better and pushed him further.

From horn masters Maceo Parker and Pee Wee Ellis to vocalists Lyn Collins and Bobby Byrd, Brown was a musical A & R master, restless and always looking for the next big thing. Most times, that would manifest in the latest James Brown smash under his own name. But not always. His stable of talent was overflowing in the 60s and 70s, and, thankfully, the tape machine in his studio was always rolling.

Originally released in 1988, during the era of hip-hops golden age of sampling, its no surprise that just about every note heard in this incredible collection has been used on not one but multiple rap classics. Which, at the time, was proof of Browns (and his crews) staying power. But were almost three decades beyond those days now, and it has lost none of its musical potency.

Diving deeper into the vaults than the also-incredible Part 1 of the Funky People series, there is not a weak track in the bunch. Moving beyond well-known JBs cuts, things get interesting from the get-go with Bobby Byrds monumental groover I Know You Got Soul. Hank Ballard and Marva Whitney also enter the fray, leading the way to Myra Barnes emotional and powerful Message From The Soul Sisters (Parts 1 & 2) and Lyn Collins slow, smoldering cover of Isaac Hayes Do Your Thing,.

Politics even get the funky soul treatment, with Fred Wesley & The JBs You Can Have Watergate But Gimme Some Bucks And Ill Be Straight and Im Paying Taxes, But What Am I Buying? And it should not be overlooked that Maceo & The Macks instrumental workout Soul Power 74 even features a proto-sampling snippet from MLKs Ive Been To The Mountaintop speech from 1968.

This is another amazing collection of James Browns funky friends, without one second of filler, brought to you as a glorious 2-LP gatefold by your friends at Get On Down.