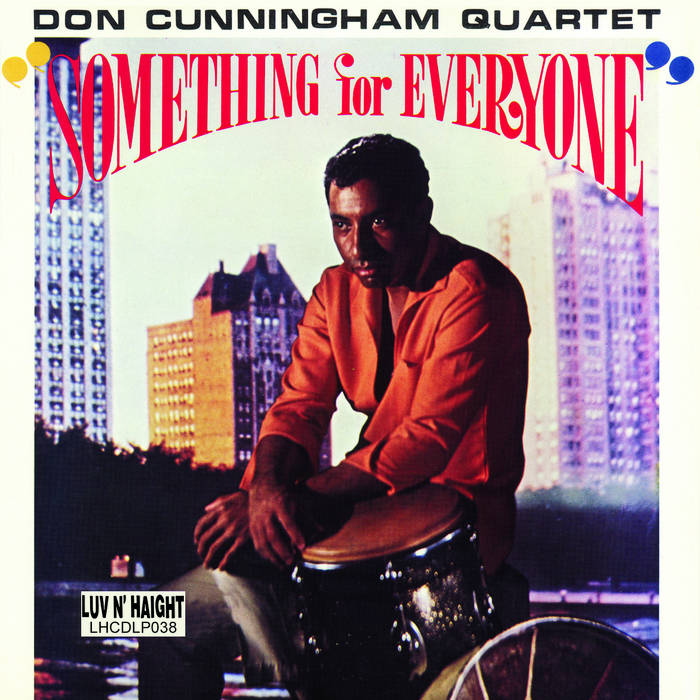 Don Cunningham, Something For Everyone

Ridiculously rare vinyl, superb musicianship, and a Playboy club are ingredients that make the Don Cunningham Quartet's "Something For Everyone" album so tasty. Luv N'Haight is proud to preserve and re-issue one of the most collectible and highly sought-after jazz-dance records.

Brad Holiday's original liner notes (featured on the back of this album) tell it like it was. Don Cunningham, Marion Miller, John Mixon, and Manny Quintero formed the Don Cunningham quartet and played "The Living Room" at Hugh Hefner's St. Louis branch of the Playboy Club between 1965 and 1968. Their music was different from that of the jazz mainstays playing in "The Penthouse Room." It was also different from any act in St. Louis at the time.

"Before forming the Quartet I traveled to Fiji, Australia, the Caribbean and beyond as part of the Johnny Mathis group," explains Cunningham. "On these tours I discovered the "island sound," which was something I'd never been exposed to before. It was enchanting, mysterious and sexual."

The Quartet's unique blend of exotica, Latin and Brazilian rhythms, jazz and easy listening was a perfect fit for the Playboy club.

"I was influenced by having seen Arthur Lyman, Cal Tjader, Willie Bobo, Mongo Santamaria, and Harry Belafonte play live. Not to mention that I was buying all the Les Baxter I could get!" adds Cunningham. The band's sound caught the attention of Bob Webb, a wealthy local businessman. As a friend of piano player Marion Miller he'd learned of the Quartets popularity.

Webb fronted the funds for Miller to create Exclusive records, releasing three albums and two 45rpm singles, including the "Something For Everyone" LP.

"The music was only sold locally. We never looked up a distributor and we really didn't have a regular record deal," says Miller.

Don Cunningham only remembers selling and giving-away the album at Playboy appearances and to a few friends outside of club hours. Only 500 copies were ever printed, some mono, some stereo, it's not known how many of each format.

Of all the tracks on the album "Tabu" has been the biggest hit with the jazz-dance crowd. That track is the reason many collectors have the album on their wants lists. It remains a tune worthy of heavy DJ play. "Something For Everyone" has been at the top of my wants list for about 10 years now. All my other wants I have managed to track down over the years, but to own an original copy of the Don Cunningham album is as illusionary as driving a Rolls Royce," says producer/DJ Rainer Truby of Compost Records.

"Not only is it a rare album it is also a good one. "Tabu" to me is the mother of all jazzdance records! A welcome release! I'm curious to check the rest of the LP, but "Tabu" is more than enough of a reason to stroll down to your local record dealer," he adds.

Miller and Cunningham are surprised but obviously very happy with the current interest in the album. Both are still active musicians and hope that this re-issue may stimulate even more work for them. At time of writing Cunningham was on the road with his wife, appearing as The Cunninghams on tour with the Count Basie band.

"It's great that the album is being re-issued. There's truly a quality of music on it that has been missed for so long. In a way it's world music - Polynesian, samba, Brazil, jazz, West Indian. It has the energy of Latin and funk records. It's inspired by - but is not really - easy listening, you couldn't exactly sleep in our "Quiet Village!"" says Cunningham.