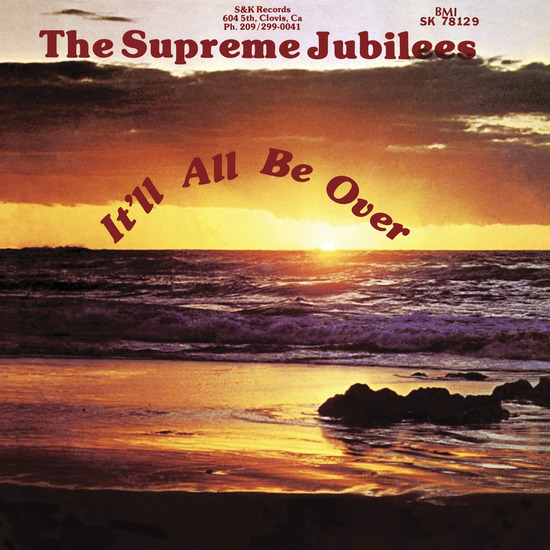 Supreme Jubilees, It'll All Be Over

1LP - LIGHT IN THE ATTIC

It'll All Be Over BUY

Do You Believe BUY

I Am On The Lord's Side BUY

Standing In The Need Of Prayer BUY

Got A Right BUY

It'll All Be Over

If God had a disco, the DJ would be playing California gospel-soul group The Supreme Jubilees. “We won’t have to cry no more,” the tuxedo-clad group would sing, in high, angelic vocals over smooth grooves. “It’ll all be over.” Prepare to dance and contemplate death all at the same time.

A band of brothers and cousins, the group was founded from two families: brothers Joe and Dave Kingsby plus Dave’s son David Kingsby Jr., and keyboardist Leonard Sanders plus his brothers Phillips (drummer), Tim (bassist), and Melvin (tenor). The Sanders clan grew up singing together in the Witness of Jesus Christ church in Fresno CA, where dad Marion was pastor. Guitarist Larry Price–who belonged to neither family–completed the line-up that recorded the group’s first–and, prophetically, only–album, It’ll All Be Over.

Released in 1980 on the group’s own S&K (Sanders & Kingsby) label, It’ll All Be Over pinpoints a fatalistic mood exemplified by the title. Its lyrics drawn from the Old Testament, its sound from the church by way of the disco, and it’s a feel captured by the album cover–a low, orange sun setting over the Pacific ocean. It is, as Jessica Hundley observes in the brand new liner notes, “both apocalyptic and seductive.”

Making the album was not easy. Sessions began in Trac Record Co, a country and western studio in Fresno, CA, where the engineer was so put out by the group’s requests for heavier bass in the mix, he stopped the session and kicked them out. They left with four songs–one side of the album–and the record was completed at Sierra Recording Studio in Visalia, CA. Leonard Sanders reported having a spiritual encounter in his sleep while in Visalia; the next day he recorded his part of the album’s title track in a single take.

After the LP was pressed, the group took their music on tour, first in California, where they played with acts including the Gospel Keynotes, The Jackson Southernaires, and the Mighty Clouds of Joy, and then on an ill-fated trip to Texas. A follow-up album was planned for 1981, but it never materialized; having slept sometimes a dozen to a room in Texas, the men in the band were reluctant to leave jobs, wives, and kids for the hardship of the road. The group simply fizzled out, even if the friendships never did.

A copy of the album sold to a fan on that Texan tour made its way to a San Antonio record store, where it was discovered nearly three decades later by collector David Haffner (Friends of Sound). He managed to track down the Kingsby-Sanders clan at a Fourth Of July barbecue in Fresno in 2004. And he eventually introduced the group to Light In The Attic Records, which now presents the album, restored, remastered, and available to the public for the first time.