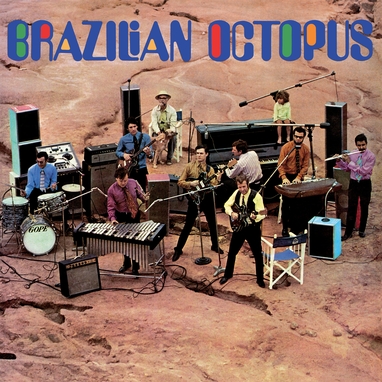 This is such a unique album. Each tune is a winner, no wonder originals have fetched exorbitant prices in the collectors market, and it has been hailed by connoisseurs such as Nicola Conte or Andy Votel over the years. It features Hermeto Pascoal, Cido Bianchi (former Milton Banana Trio member), Lanny Gordin… and shows an unusual mix of different styles and influences that transcends any possible category: from pop to Cuban rhythms. The bossa nova is obviously also present, as in many other Brazilian recordings from 1969, but the complex arrangements make this record lean towards the jazzier side of things while the organ/guitar/vibes sounds will also be appealing for garage music lovers.Brazilian Octopus was formed in 1968 after Lívio Rangan, a wealthy businessman from Sao Paulo, asked Cido Bianchi to put together a band that would play at the shows run by his fashion company, Rhodia. A proper work contract was issued, including three months of paid rehearsals.Despite their diverse background, most of the members of the band already knew each other as they would often perform at Stardust, a popular club managed by Lanny's father. Hermeto Pascoal and Nilson da Matta joined the band a few months later. Then Mr Rangan approached the band again with a new idea: the recording of a full album mixing tunes written by other artists and their own compositions. The record was released by Fermata in 1969 and the band was then tempted with the idea of recording a second album. However, the offer was declined since the musicians had not received any fee for their work. That was the end of Brazilian Octopus.Nearly five decades after its first release, with original copies having almost vanished off the face of Earth, now is the time for making this beauty available again.