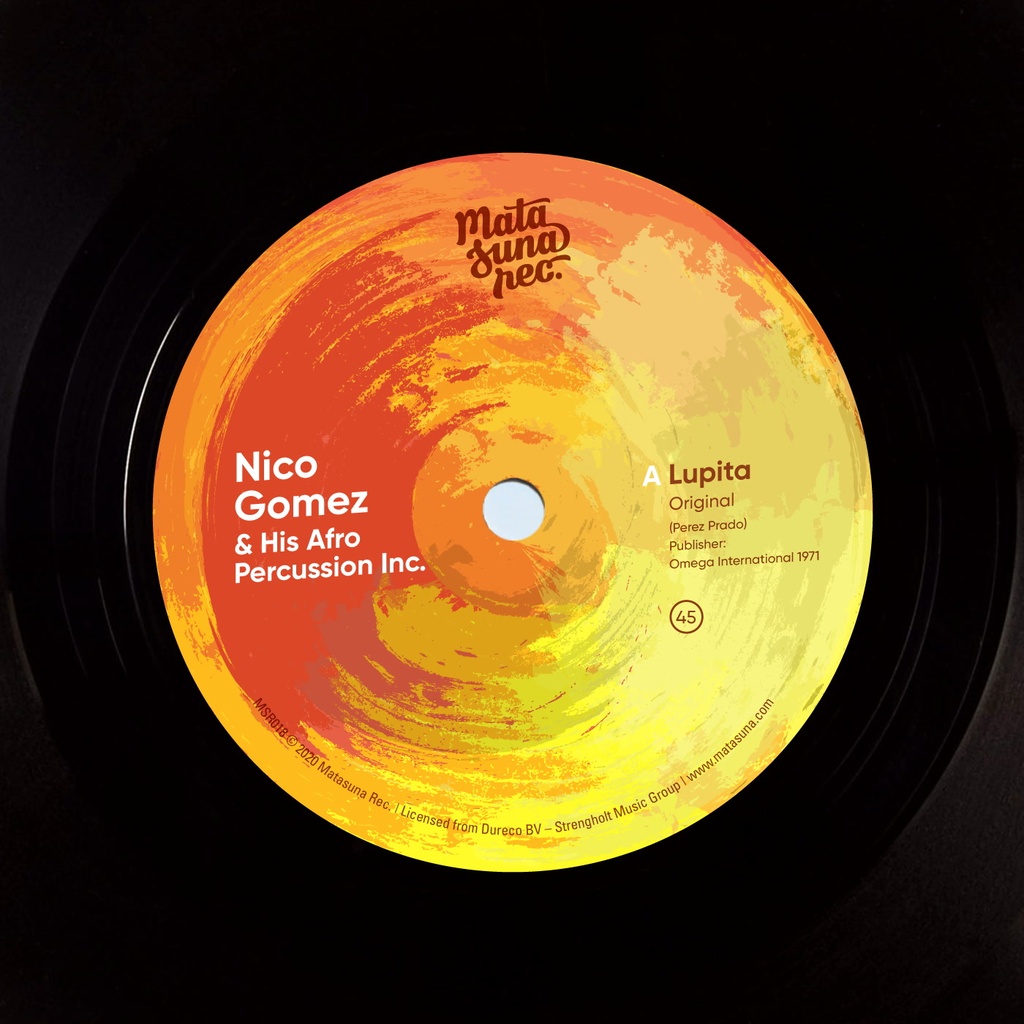 Matasuna Records is delighted to reissue one of their absolute highlights and favourite songs of Nico Gomez And His Afro Percussion Inc. As well as the original version, which was released on a 7inch by Mr. Bongo a few years ago and is completely sold out, they've included a rework by the restless and well-known US producer & Dj Bosq. His version, which became a DJ weapon as a digital promo, is now officially licensed on vinyl for the first time. For this release his version was revised once again for the best possible sound quality on an essential 7inch with the newly mastered original song.

Joseph Van Het Groenewoud, who would later become known as Nico Gomez, was a musician & composer from the Netherlands. He spent his youth in the Antilles, Cuba and other islands of the Caribbean, which had an unmistakable influence on his music. As a passionate musician and skilled guitarist he was familiar with the typical rhythms and melodies of this region. Later he returned to the Netherlands, before fleeing from there to Belgium in 1946 to escape from serving in the Dutch army in Indonesia. From then on he called himself Nico Ooms. It's said that he was so obsessed with Cuban music that he changed his name to Nico Gomez - in any case, the name fit better with the Latin American music he brought to the stage. He had made a name for himself as a composer and arranger for various artists and orchestras – e.g. he wrote for Los Chakachas, a well-known Belgian Latinsoul combo. But he also conducted the Nico Gomez Orchestra.

One of the most sought-after recordings was the 1971 album Ritual by his band Nico Gomez And His Afro Percussion Inc. It is considered one of the best Afrolatin albums of the 1970s - especially once this masterpiece was (re)discovered by Djs and its popularity soared. The album is a tasty mixture of Latinfunk grooves, deep Afrosoul and Chicano rock influences like fuzzy guitar and heavy organ.

Lupita on the A-side is a cover version of the song by Perez Prado, the Cuban-born King of Mambo, who has legendary status in his adopted country of Mexico. In contrast to Prado's elated original, Nico Gomez's version is an absolute funk monster, driven by heavy percussions, psychedelic organ grooves, fuzz guitar, exciting brass and a deep bass line. A truly extraordinary song!

Bosq's version on the B-side takes the original even further, adding more percussive elements and killer beats and breaks. His DJ-friendly rework has proven itself on dance floors around the world, always turning the mood into a hot melting pot.