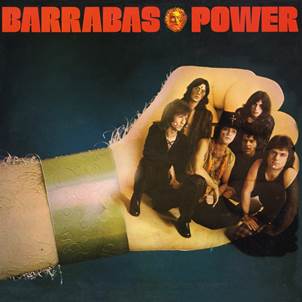 “Power” was the second Barrabás album, originally released in 1973. As well as their first album, this is another great example of funk-rock, but this time with glam, hard & psych touches, including some of their most celebrated songs: “Casanova”, “The Horse”, “Children”...

After reaching international success with their first album, the line-up of Barrabas experienced some major changes: Fernando Arbex, more and more involved as songwriter and producer for other artists, leaves the drum kit, being replaced by drummer José María Moll (from Juan & Junior’s backing band). From now on, Fernando will focus on songwriting & production duties for Barrabas. Also, due to an accident, bass player / lead singer Iñaki Egaña is forced to leave the band. A new powerful singer is found: José Luis Tejada (from Los No, a legendary beat band from Barcelona). And finally original guitar player Miguel Morales switched to bass.

For the album recording, Arbex decided to use the same studio where they recorded the first Barrabas album: RCA in Madrid. J. Cobos was again the sound engineer and Fernando was the producer and main songwriter. “Power” was the result, released in 1973 housed in a glam-tastic gatefold sleeve. Highlights are “Mr. Money” (pure funk-rock which entered the US charts); the atmospheric “The Horse”, the psych-funk of “Time To Love” or the catchy “Children”, which was a big hit in South America, especially in Venezuela.