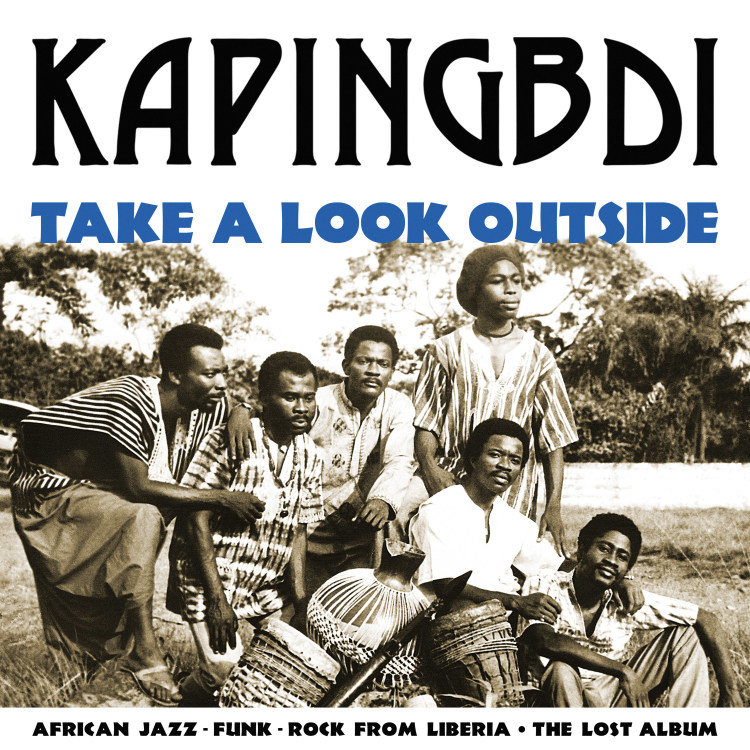 Kapingbdi, Take A Look Outside

This is the fourth, and until now, unreleased album by Kapingbdi, a six-piece band from West Africa, which billed itself as “African Jazz-Funk-Rock from Liberia”. It is a skilful mix of African and Western elements, with a spiritual heart and dynamic grooves. In January 1985 and shortly before the group disbanded, they recorded nine tracks for an aborted LP project at Masterpiece studio in Detroit, U.S.A. In 2019 the music was carefully remastered from the original 24-track master tape. For Kapingbdi, music is not for its own purpose, but serves to carry a message born of the African experience and perspective, intended for all people.

Recorded 1985 on 24 tracks at Masterpiece studio in Detroit/ U.S.A., all music and lyrics by E. Kojo Samuels, except “Yakundé” (lyrics by Richard "Papa Jah” Addison and Samuel I. “Sam Kay” Kamara Foday)

In late 1984, Kapingbdi traveled from their home country of Liberia to embark on a US tour. Their "Hey Brother" LP, which had been recently released in America, gained the attention of promoters and music lovers alike. Within 16 days, the band performed seven concerts in small clubs such as the Maple Leaf Lounge in New Orleans and the Motor Bar in Detroit. In January 1985, the musicians assembled at the Detroit Masterpiece studio to record nine new songs for their fourth LP. There was a four week break before Kapingbdi were scheduled to tour Japan. Kojo Samuels, The Bandleader, flew back to Liberia, whilst the remaining musicians spent their spare time in the U.S.A. When Kojo returned from his travels, there were a few surprises in store. Firstly, four of the five Africans applied for Green Cards and were successful. This gained them the right to live permanently in America. Secondly, the fifth was involuntarily detained, having been arrested on drug trafficking charges. Thirdly, three of the four had married the next-best Americans in no time at all. The last was initially untraceable, but later appeared as an employee of a chicken wing stall. After nine years and three LP releases, the band came to a sudden end. Subsequently, their tour of Japan and other concerts in Europe were canceled, as well as finalizing the work on Kapingbdi`s fourth album. Kojo rescued the 24-track tape from Detroit and took it to Germany, where it laid in his basement for decades. The breach of trust by his fellow musicians was too painful, which is why he tried to forget the recordings. Almost 35 years later, the "missing" fourth Kapingbdi album is finally released. Transferred directly from the master tape at Tonmeisterei in Oldenburg, then mixed and mastered at Audiomoto Studio in Berlin. To this day, it features the last recordings of the band. The cover photo, which was shot in Detroit, was to form part of the design for the original release of the fourth LP. "Take A Look Outside", as Kojo says today, has become Kapingbdi`s best album. (Ekkehart Fleischhammer, Sonorama Records 2019)

A loser during the recent Montreux-Detroit Festival was the Liberian band Kapingbdi. A plumbing mishap at the Book-Cadillac Hotel necessitated a round of mid-weekend room shuffling, leaving Kapingbdi the odd band out. But the sextet, which bills itself as “African Jazz-Rock from Liberia”, was back at the hotel`s Motor Bar last weekend. Word-of-mouth brought a sampling of the curious and the cognoscenti, and the response to Kapingbdi (ka-ping-gee) was enthusiastic. The group is scheduled to remain at the hotel this weekend and next, after which its plans are up in the air except for appearances at the Liberian pavillion of the New Orleans World`s Fair in mid-October. Kapingbdi`s music? Actually some Kapingbdi pieces are strictly African and played on acoustic instruments as traditional as a horn made from a hollowed elephant tusk. Most of the group`s music is a skilful mix of traditional and more contemporary African elements that should be hard to mistake with jazz, American pop and reggae. “It`s All Africa, in some of the ways we phrase the dynamics. It`s still a kind of root”, said Samuels, 40, who sings and plays several instruments with the group. The band began to gain a reputation in Europe in 1980, around the time of the violent military coup that toppled Liberia`s civil government. One of the group`s German albums came out then, and songs like “Why I can`t get no Pay” began to get airplay, That, according to Samuels, helped establish a new wave of original Liberian pop. “The mass started really asking for originality and started to enjoy what we were doing”, Samuels said. And it looks as if the same is about to happen in Detroit. (from the Detroit Free Press, September 13, 1984)

From a review of a Kapingbdi concert 1983 in Bonn/ Germany:

“Kapingbdi” is a Mende word that means “born in the night”, and the seven members of the touring band do indeed play music that could be described as “coming from the night of the venerable continent.” For two hours, an overflow crowd at the “Kulturforum” in Bonn heard various combinations of bongo and conga drums, a jazzy saxophone, and several rhythm guitars. Bandleader Kojo Samuels sang in English. He spent several years in the Federal Republic of Germany, studying music in Cologne and Frankfurt. The current performance marked the fourth tour of the group in Germany since its founding in 1978. All the band members reside in Liberia. For them, music is not its own purpose but serves to carry a message, according to Samuels, a message born of the African experience and perspective though intended for all people. Though many of their pieces deal with African life, all of them convey the urgent, moral call for more human dignity, more humaneness, for more insight throughout the world. The Liberian musicians showed complete command of their instruments. Fast rhythms, constant changes in instruments, and a melodious diversity of tunes resulted in a blend of jazz, rock and reggae which swept the electrified Bonn crowd from their seats. Many young listeners even began to dance in front of the stage. The Performance climaxed when band leader Samuels picked up the elephant tusk horn to present Liberian Folk music with an accompaniment of drummers. It was as if the soul and power of African music were being unveiled in this fascinating serenade of drums and horns. (from the Liberian “Daily Observer”, November 10, 1983)