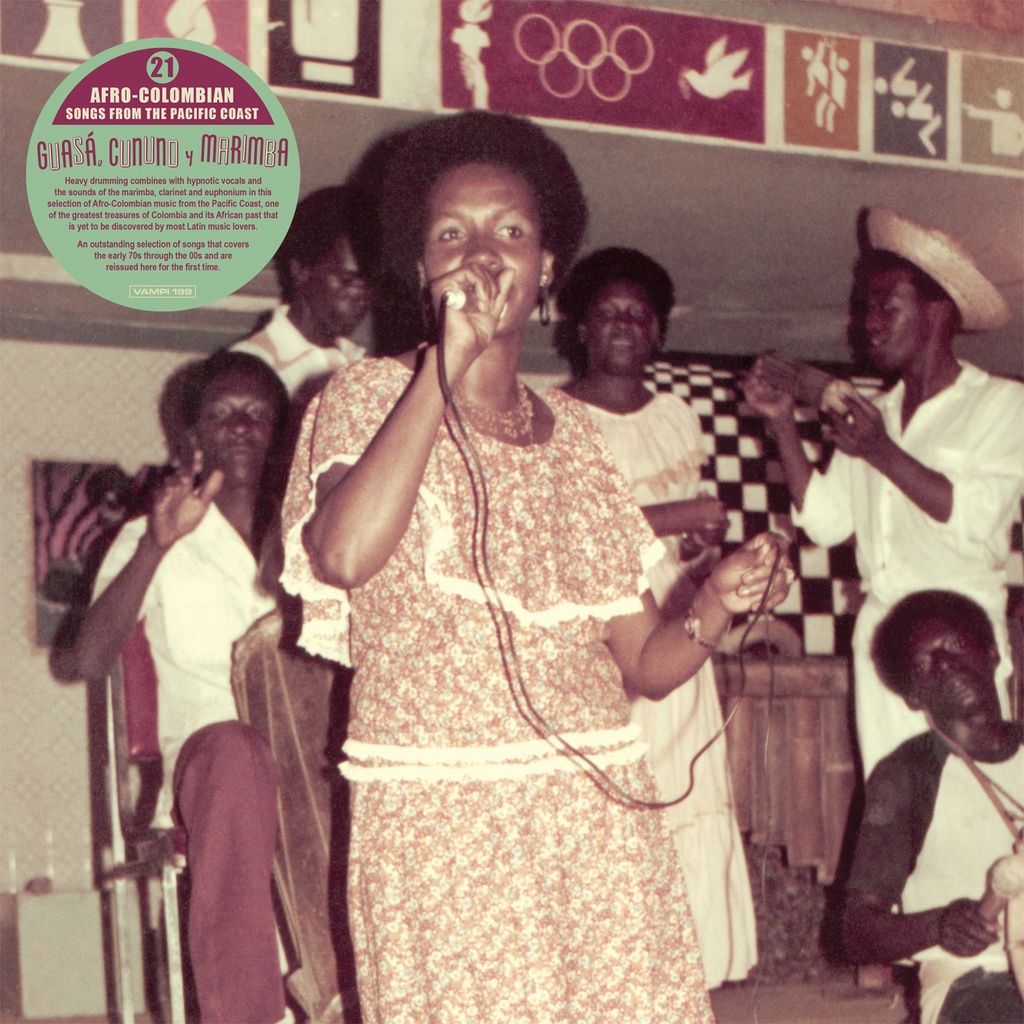 The music of the Colombian Pacific is one of the greatest treasures of Colombia and its African past, but not many people remember the songs recorded on anthologies, which are largely a forgotten chapter of Colombia´s musical history. It comprises genres such as currulao and chirimía and many others that are yet to be discovered by most Latin music lovers.

Heavy drumming combines with hypnotic vocals and the sounds of the marimba, clarinet and euphonium in this selection of Afro-Colombian music from the Pacific Coast.

The Colombian Pacific coast has always been one of the most forgotten regions of Colombia: ninety percent of the population are of African descent and ten percent indigenous peoples and mestizos. It’s a region of dense tropical rain forest and the second rainiest place on earth. It borders Panama to the north and Ecuador to the south. Most of the population live around the urban centres like Buenaventura, Quibdó, Guapi, Timbiquí and Tumaco. Colonised late, after several failed attempts by the Spanish who were thwarted by the impenetrable jungle and climate of the territory.

Two or three centuries of slavery filled the Pacific coast with the most prestigious African dynasties. These men and women brought their musical instruments with them and all their baggage of beautiful melodies and ancestral harmonies which would find new life in the New World.

In the department of Chocó in the north Pacific, Afro-descendants reinterpreted the military drums brought in by the colonisers, creating the chirimía style, combining side drums with the sounds of the clarinet and euphonium, a jazz fanfare from the Colombian Pacific. The Pacific coast is home to a wealth of musical styles: apart from the currulao and chirimía, there’s a host of other genres including tamborito, abozao, aguabajo, jota, bunde, torbellino, juga, bambuco, alabaos, chigualos and gualíes and many other we know about or are yet to discover.

The black population integrated as soon as they arrived with the native Indian cosmogony, enriching their cultural baggage with shamanic traditions and sciences of the local community. Meanwhile, in the city of Buenaventura, the urban centre of the Pacific and the biggest port in Colombia, orchestras and bands flourished. Cuban hit records reached these shores from Puerto Rico and from across the Spanish-speaking Caribbean.

The earliest recordings date back to the beginning of the sixties, from the cities of Cali and Buenaventura, but for music from the Pacific there was a long and winding road to go down before it emerged from anonymity in a country dominated by cumbia and Caribbean beats, which ignored its regions, especially regions as poor and marginalized as the Colombian Pacific.

The music of the Colombian Pacific is one of the greatest treasures of Colombia and its African past, but not many people remember the songs recorded on anthologies, which are largely a forgotten chapter of Colombia´s musical history. This album aims to revisit these formats and recording styles so that new generations of musicians can reconnect with this heritage and these wonderful musical gems can see the light at last, as they are immortal aspects of Afro-Colombia and its culture.