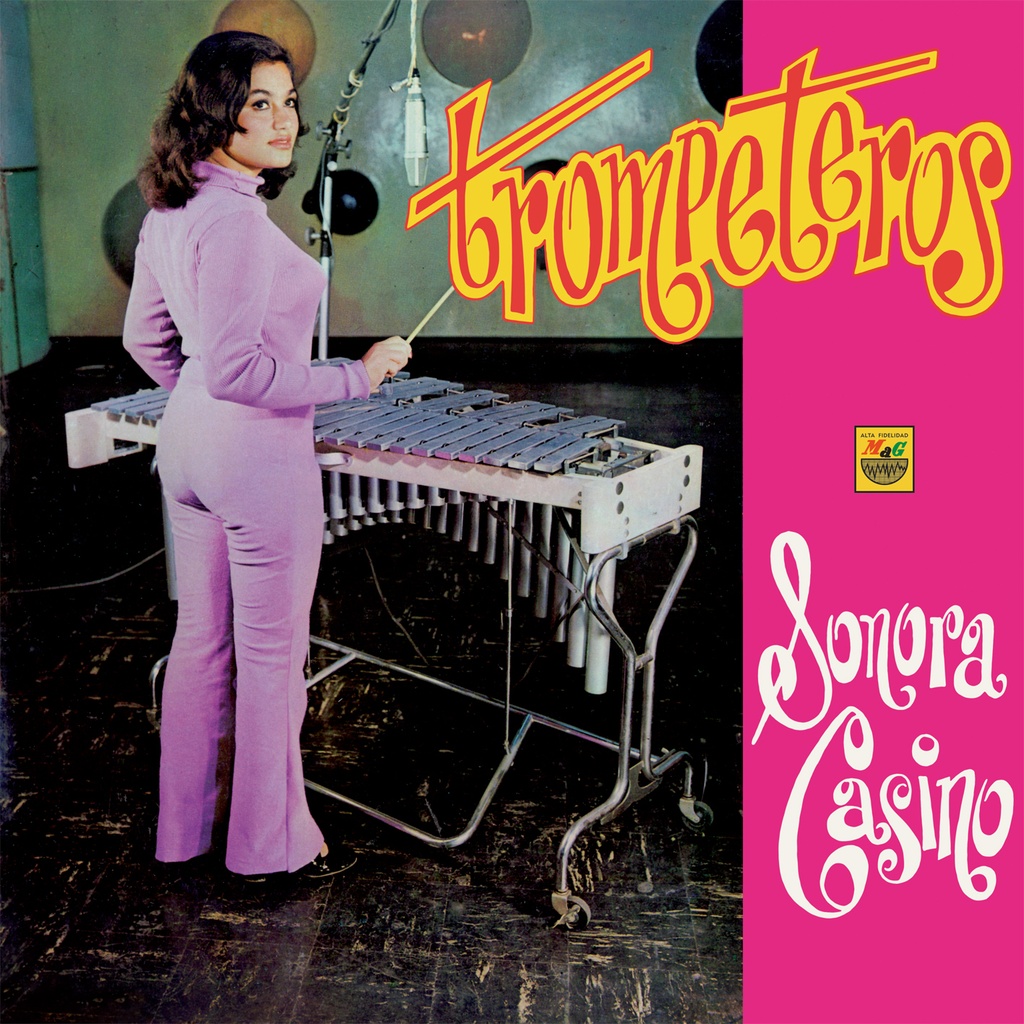 First ever reissue of one of the most sought after titles in the catalogue of Peruvian’s label MAG, in high demand not only among Latin music collectors but also among those interested in the most exotic and experimental psychedelic sounds around.

It includes ‘Astronautas a Mercurio’, a cosmic descarga full of electronic effects, filtered voices and fierce guitars with wah wah and raw distortion, as well as guarachas, cumbias and descargas.

Hugo Macedo was a member of the first sonora in Peru, directed by his brother: the Sonora de Lucho Macedo. His brothers were the singers of the band while he performed as a timbalero. After nine years he founded the Sonora Casino of Hugo Macedo in 1964, later incorporating his wife, Lucía "Pochita" Rivera as a vocalist. “Trompeteros” was released on the Peruvian record label MAG in 1972. Previously, the Sonora Casino had already recorded several albums for Philips since the mid-60s. At the time their repertoire was fed by rhythms such as cha cha cha, bolero, guaracha...

Their MAG period would start in 1970 with the album “Pochita y la Sonora Casino de Hugo Macedo” in which Hugo Macedo's wife was granted with an important visual presence on the front cover, with a similar follow-up on “Trompeteros”, creating some confusion since vocalist Pachito Nalmy was the actual main singer on the record. The vocalist, who hails from Callao, demonstrates here a great vocal versatility as captured on songs like 'Guajira del amor', with a heavy rhythm that will surely delight boogaloo lovers, or the bolero number 'Pasa, pasa', being both songs own compositions of the multitalented Nalmy.

Guarachas, descargas and cumbias complete the offering of this fantastic album, one of the strongest tropical LPs in the MAG catalogue. But the real banger here is the almost magical 'Astronauts to Mercury', a cosmic descarga full of electronic effects, filtered voices and fierce guitars with wah wah and raw distortion, closer to the sound of any psychedelic recording than the classic tropical sound of La Sonora Casino, and right next to those elements, an impressive brass section that boosts the intensity of the song to the highest levels. It is not surprising that “Trompeteros” has become in recent years a highly sought-after album not only by Latin music collectors but also by those after the most exotic and experimental psychedelic sounds around...