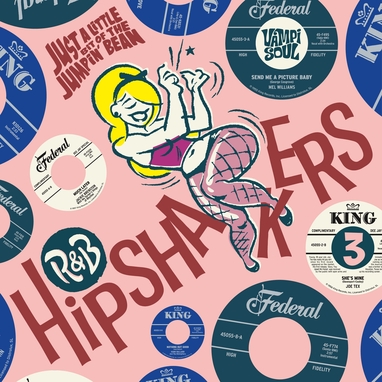 10 Nothing But Good Hank Ballard and The Midnighters

12 Much Later Jackie Brenston With The Turner's Kings of Rhythm

15 In The Open Freddy King

16 One Buffalo (You Mean A Nickel) Jimmy Peterson

19 The Jumpin’ Bean The Mystics

For our latest dip into the King/Federal vaults, the goal was to find 20 underexposed R&B songs that, assembled into a package, would entice you to have a party. Now, we know there are other compilations out there that come complete with thousands of words of scholarly text based on extensive interviews and laborious research. We love them, they make the world a richer place. But that’s not our bag. Here is what’s our bag:• Drummer Cozy Cole’s cymbals on COZY’S MAMBO. The same track would come out again three years later on King’s Bethlehem subsidiary as ‘Cozy And Bossa’ to capitalize on the burgeoning bossa nova craze and perhaps take advantage of audiences’ confusion over exotic dance rhythms. Mambo? Bossa? Whatever. Play, Cozy, play!

• New Orleans native Linda Hopkins’ wail on MAMA NEEDS YOUR LOVIN’ BABY. She’d go on to play Bessie Smith on Broadway in the 70s. (Not that Broadway is our bag, either.)

• The clippety-cloppety rhythm of Earl King’s OLD FAITHFUL AND TRUE LOVE, one of the earliest recordings on here, from 1955. It makes us long for the saddle! NB: This is Earl Connelly King, not the better-known New Orleans singer-songwriter-guitarist Earl King.

• Speaking of saddles: the galloping tempo of SHE’S MINE, by the Rock & Roll Cowboy, Joe Tex – just his third solo single out of several zillion.

• The whistled response to Mel Williams’s lead vocals on SEND ME A PICTURE BABY, and practically everything else about this song, one of our favorites.

• The brilliant arrangement of Eugene Church’s version of SIXTEEN TONS: that bass voice, those sloppy finger snaps, the chorus of whomp-whomps.

• The lip-smacking cry of “Rib tips!” amid The Drivers’ enumeration of skeletal components in DRY BONES TWIST.

• The irresistible swing of superprolific keyboard man Bill Doggett’s HOLD IT. • Lowman Pauling’s electric (in every sense) guitar on SOLID ROCK. He’s the fellow Steve Cropper points to as his biggest influence, and he’s in typical riveting form here.

• All of the voices, especially Hank Ballard’s, on NOTHING BUT GOOD. Rest assured that as long as we keep making Hipshakers collections, Hank Ballard will always have a spot with his name on it. • Billy Gayles’s caveman attitude in TAKE YOUR FINE FRAME HOME. They say possession is nine-tenths of the law, and I’ve never had any idea what they mean by that, but what with this and Joe Tex’s jealous act, unapologetic male possession of women is one-tenth of our collection!

• Jackie Brenston’s hoarse, pissed-off kiss-off: MUCH LATER for you, baby. And the great Ike Turner’s perhaps intemperate use of the whammy bar.

• Dancing to the slinky beat of THANKS MR POSTMAN. Mid-tempo minor-key love songs one can’t help dancing to: we can’t get enough of them!

• All that percussion on DON’T PLAY WITH LOVE, and the way it stops to make room for Little Willie John’s voice at the chorus. And as if it even needed saying: what a voice. • The tightly wound tension of guitar superstar Freddy King’s IN THE OPEN.

• The exuberant silliness tempering the tragedy of ONE BUFFALO. Note to non-Americans: the US five-cent piece until 1938 was called a Buffalo nickel, and it was still in circulation when Jimmy Peterson’s 45 came out in 1962. • The interplay between King Pins lead TC Lee and the backing voices in I WON’T HAVE IT.

• The contrast between Tiny Topsy’s throaty toughness in JUST A LITTLE BIT and the weird tweeting chorus and flute.

• The fact that a wannabe dance-craze song with the worrisome title THE JUMPIN’ BEAN is actually really good – especially The Mystics’ harmonies and that percussion.

• Saxman Red Prysock’s greasy lead, and the way it evokes an honest-to-goodness HAREM GIRL.That makes 20 hipshakers in our bag, which we hope is your bag, too. Of course, you can tack on “And it’s great for dancing!” to every point above. Just don’t forget: you gotta look clean to do that Jumpin’ Bean.Mr Fine Wine