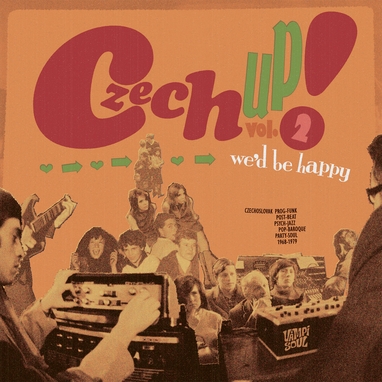 14 It’s Always Ever The Same Vulkán

19 I Wish I Were The Soulmen

Welcome to the second Vampisoul set of trouvailles from the Supraphon vaults, a series of compilations that we launched in 2016 under the title “Czech Up!”. It’s a concept that we had in mind ever since we began our collaboration with Supraphon over ten years ago, but that wasn’t initially possible to accomplish due to – luckily temporary – licensing restrictions. In the meantime, just as Supraphon is steadily progressing with revalidating their immense back catalogue, we’re now able to move along with them, picking up their cherries as they keep popping up on the notional surface.The Supraphon label was established in the early 1950s in former Czechoslovakia and has been continuously active ever since. While it’s always been highly esteemed by music connoisseurs for its excellent classical music releases, Supraphon’s pop, rock and jazz music catalogue, although comprising around 60,000 unique tracks, remains for the most part a big unknown to the international audience. Today it also incorporates the complete back catalogue of Panton, another Czechoslovak label launched in 1967 that operated independently until the late 1990s.On “Czech Up! Volume 2”, we’re again presenting an array of astounding songs from the otherwise inglorious decade of political and social gloom in Czechoslovakia, a decade that actually started shortly after the invasion of the Warsaw Pact armies in 1968. Here’s your chance to meet up with some eccentric fools, wry sarcasm, fountains of cognition, lovers approaching, lovers leaving, faunal fables, bizarre beings, wizardly seasons, ordinary oddities, unearthly gardens, morbid dreams, pretense obedience, melancholy windscapes, wishful thinking, exotic jungles and eerie ravines… So whether you’re hanging loose, shaking a leg, sampling some of this’n’that, or just opening your mind and ears widely, here’s 22 more tracks that won’t let you down while you’re czeching up.