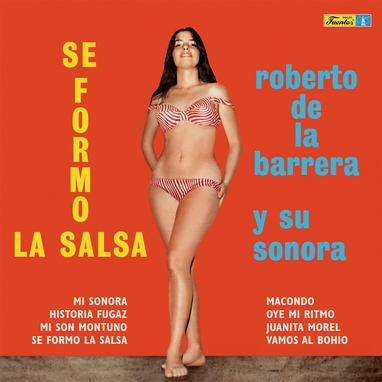 Colombia has produced many fine pianists in the Antillean traditions rooted in Cuban music. Discos Fuentes had its share of geniuses that tickled the 88s in the salsa idiom, yet most of them, even when headlining an orchestra, remain unknown or relatively obscure outside of collector’s circles. Such is the case of Roberto de la Barrera, who not only cut several LPs under his own name for the label but also was an uncredited session pianist and arranger on various other Fuentes records. De la Barrera did not hail from the commercial centers of the interior like Bogotá or Medellín, nor did he come from the “salsa capital” of Cali or even the port of Buenaventura where so many Cuban and Puerto Rican records first entered the country. His birthplace was the Caribbean city of Cartagena, which, along with Barranquilla and Santa Marta, forms an area with its own rich musical traditions like the cumbia and porro, but also was one of the first regions in Colombia to feature imported Antillean genres like mambo, cha cha cha and pachanga. Also, significantly, Cartagena was the original home of Discos Fuentes before it moved to Medellín, and is the birthplace or initial stomping ground of other important figures in the salsa idiom like Joe Arroyo, Michi Sarmiento, Joe Madrid, Johnny Moré, Víctor del Real, Juan Carlos Coronel, Joseíto Martínez and Hugo Alandete.Roberto de la Barrera was arguably the first cartagenero to record music that would later be labeled “tropical” and “salsa” with his group Roberto de La Barrera y su Sonora, starting off with cumbia, porro, charanga and pachanga in the early to mid-1960s, and ending the decade with guaguancó, guaracha, descarga and son montuno, leaving a handful of gems for posterity, such as ‘El baile de los cocacolos’, ‘Vamos a guarachar’ and ‘Se formó’ from the earlier period and ‘Se formó la salsa’, ‘Mi sonora’ and ‘Oye mi ritmo’ as the 1970s began. After taking the piano seat in the Discos Fuentes house orchestra and being hired in 1964 by label boss Antonio Fuentes as the regional musical director in the Caribbean area (based in Cartagena), where he subsequently discovered, signed and produced a lot of local talent, the following year Roberto de la Barrera y su Sonora recorded “Pa’ Los Cocacolos”, his first long play under his own name for the label, succeeded by “¡Pa’ cumbanchar!” and finally “Se formó la salsa” in 1970.All of his arrangements feature an interesting mix of Colombian and Cuban flavors, sometimes within the same tune, and often with that wonderful raw, loose, improvisational quality associated with the “descarga” jam sessions of Cachao and others a decade before. Perhaps the best example of this is ‘Mi sonora’ from “Se formó la salsa”, where the vocalist Felipe Sembergman actually name-checks New York’s famous Village Gate, home of many Latin jazz and salsa concerts at the time, thus making the connection explicit between what was beginning to catch on in Colombia as “salsa” and its New York Latin roots. Whatever the case, immediately in Roberto de la Barrera’s wake, a whole slew of groups from the coastal regions started performing in this style, like Michi y Sus Bravos (where Felipe Sembergman was a featured vocalist), Orquesta La Protesta (with a young Joe Arroyo), El Afrocombo, Los Caporales del Magdalena, Los Corraleros de Majagual, Lisandro Meza y su Combo Gigante, Los Revolucionarios, Julián y su Combo, Peregoyo y su Combo Vacaná, and Juan Piña con La Revelación. Not to mention what was starting to happen in the interior with Fruko y Sus Tesos, Sexteto Miramar and others, which was influenced by de la Barrera as well. Sometimes the Colombian “salsa” sound was mixed, at other times the genres were kept separate, but a certain Caribbean aesthetic carried its way through everything these artists did, and Roberto de la Barrera was a pioneer in introducing modern Latin sounds from Havana, New York and San Juan. After his stint with Fuentes, Roberto teamed up with his brother Raúl de la Barrera, managing the recording facility and record label Ecos, which released several singles on 78 and 45 from Roberto’s Orquesta Ecos, accompanied by the voice of Tony Zúñiga, as well as Los Ídolos de Palenque and the sought-after track ‘Sabrosón’ credited to Roberto de la Barrera y su Piano Mágico. Sadly, the contributions of Roberto de la Barrera in bringing salsa to the Caribbean region of Colombia and hence the rest of the country have gone largely unheralded but hopefully this reissue of “Se formó la salsa” will help set things straight.Pablo Yglesias aka DJ Bongohead