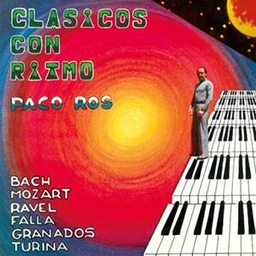 Adarce proudly presents the reissue of ‘Clásicos con Ritmo’ by Paco Ros. Originally released in 1978 on Discos Maller, still sounds as special and out of time as when it was released; a strange album that has become one of the most sought after jewels - and most hard to find - for lovers of Spanish Groove.

'Clásicos con Ritmo' offers a mix of sounds that range from a kind of analog pre-Balearic to something similar to Library Music, passing through a slow cadence groove based on sinuous layers of Hammond organ, Fender pianos, vibraphones and xylophones.

During the 11 songs on the album, Paco Ros revisits his life trajectory through memories: his Valencian childhood in Godella, his professional beginnings in Madrid and his musical adventures as a backing band, his return to Valencia -where he would form 'Los 4 Ros, then simply the Ros - to finally take refuge in his Mallorcan retreat, cradled between Party Rooms, Hotel Discotheques and endless sunrises, moved as always by his infinite love for music.