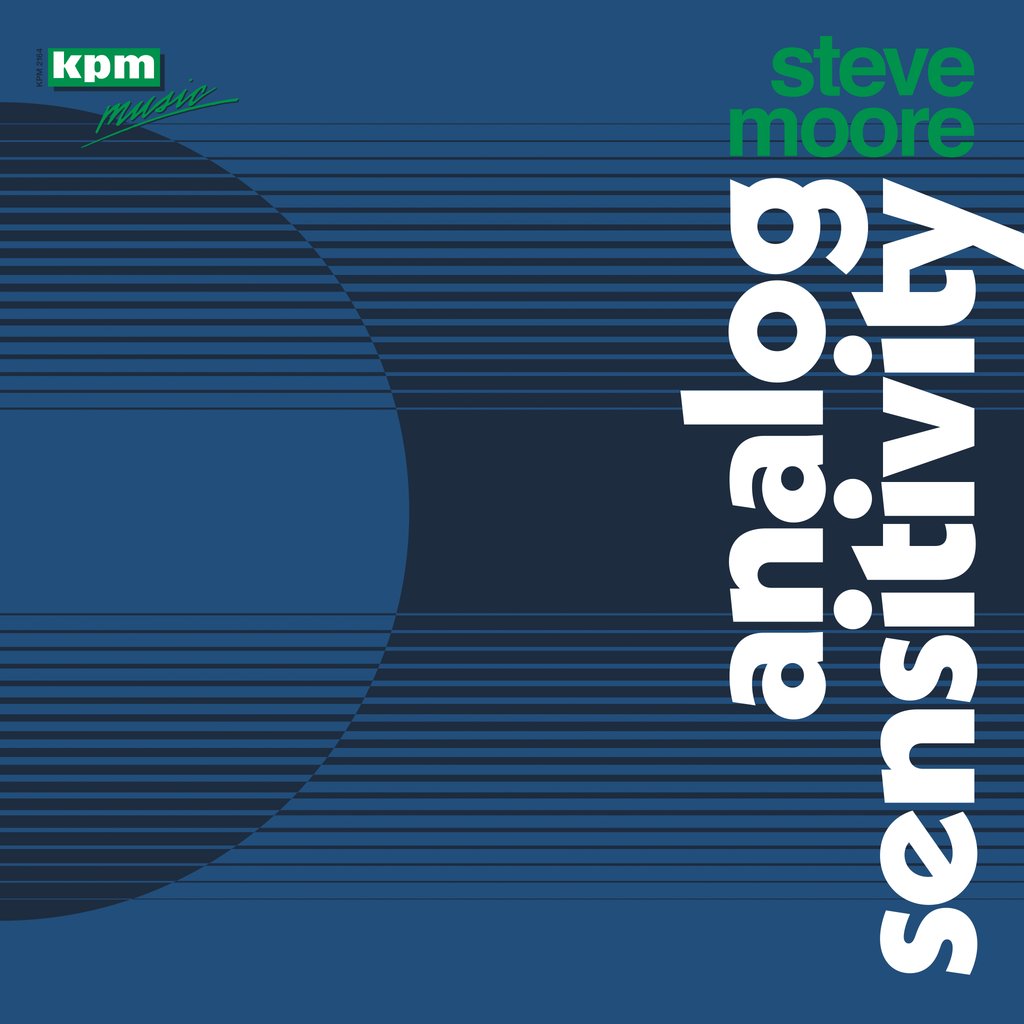 When a synth master like Steve Moore joins forces with the legendary KPM, magic must materialise. And so it does with Analog Sensitivity: cinematic, enigmatic synthscapes to both haunt and heal.

New York-based multi-instrumentalist/producer/film composer Steve Moore is probably best known for his synthesizer and bass guitar work as Zombi, together with Anthony Paterra. But he is also part of Miracle and Titan as well as being a prolific solo artist releasing music as Gianni Rossi, Lovelock and under his own name. Steve’s music has found a home across labels like Future Times, Mexican Summer, LIES, Static Caravan, Relapse, Kompakt, Spectrum Spools, Death Waltz and Ghost Box, and much of his recent work has been scoring films like The Guest and Cub. Prolific indeed.

The story of Analog Sensitivity starts with those soundtracks, or more specifically the time in between them. Rather than being commissioned by KPM, this LP comes from music Steve was recording sporadically and tinkering with for over three years during the downtime between his film projects. There were no ideas about what it was nor a plan for how it would be released, or even if it was going to be released at all.

However, after Jon Tye invited him to play on the Ocean Moon project for KPM Steve realised that the hallowed library label might be the perfect home for what he had been working on. The people at KPM agreed. Finishing production in late 2019 in Albany, NY, he came up with the track sequencing and suddenly, he had an album: Analog Sensitivity.

The LP opens with the dystopian electronic minimalism of “Eldborg”, its dark synth bass unfolding to ominous synth pads, shadowy sustains and glistening arpeggios. “At The Edge Of Perception” brings an unsettling retro-future of edgy analogue leads and desolate FX. The sound of a robotic core tears through the sparse textures of the enigmatic “Rose Of Charon”.

A chilling breeze blows through a persistent, hypnotic synth sequence on “Time Freeze”. Title track “Analog Sensitivity” is a sparkling transcendental synthscape of melody, drones and celestial synth. The brooding “Behind The Waterfall” winds down the first side, building subtle strings and a desolate sound beneath its haunting organ.

“Mirror Mountain” ushers in side two, its woozy bass and arpeggio unfolding to envelop the muffled, muted echos of its organic leads. “Syzygy” emerges you in bubbling sequences, airiness and ambient electric guitar tones. It’s followed by the cinematic minimalism of “Pentagram Of Venus” and its trickling FX.

The wind swirls through the otherworldly “Of Dust Thou Art” kicking up clouds of unsettling, plodding synth sequences leading to the uneasy atmosphere of “Message From The Beast” which builds to the echo of the last refrain of some choral incantation. Closing track “Urge Surfing” is as cool a climax as you’d hope from something so brilliantly titled, riding along hushed waves of brooding electronics.

With the clue right there in the title, Analog Sensitivity is built up from the quieter aspects of the sound Steve has been exploring and evolving for over 20 years. It’s a layering of ambivalently dense and airy, muffled and echoing sounds created on his collection of synthesizers and other electronic music hardware. And whilst some of Steve’s other work uses this vintage equipment to conjure the past, that wasn’t his intention here. Steve explains “I wanted Analog Sensitivity to feel atemporal, as though it could have been released any time over the past 30 or 40 years. While not specifically in the spirit of any particular album, I’m really into old KPM artists like Alan Hawkshaw and Brian Bennett”.

All the instruments and most of the effects on Analog Sensitivity are hardware, which will come as no surprise to anyone familiar with his work. But for Steve there is something a little more special about working on music for KPM: “For me this is very serious. I’ve been so inspired by many old KPM records that it’s a full-circle moment and a complete honour”.

So as well as his trusty Korg Polysix and Sequential Circuits Prophet 600 (he uses these two on almost everything) Steve also broke out some of his more unique and rare equipment for this album, like his Freeman String Symphonizer, Minimoog, ARP Avatar and a Roland System 100M.

Steve adds “Oh and yeah KPM wrote those song descriptions, which are PERFECT, I could never write something so perfect and concise. Haha”.

The album’s cover was designed by Mitch Smith, a local Albany artist who’s work Steve had seen around and thought would be a perfect match for the sound of Analog Sensitivity. That 1980s KPM logo provides the ultimate seal of quality. Mastering for this vinyl edition was overseen by Be With regular Simon Francis, and it was cut by the esteemed Pete Norman to be pressed in the Netherlands by Record Industry. This is surely another future classic library LP.