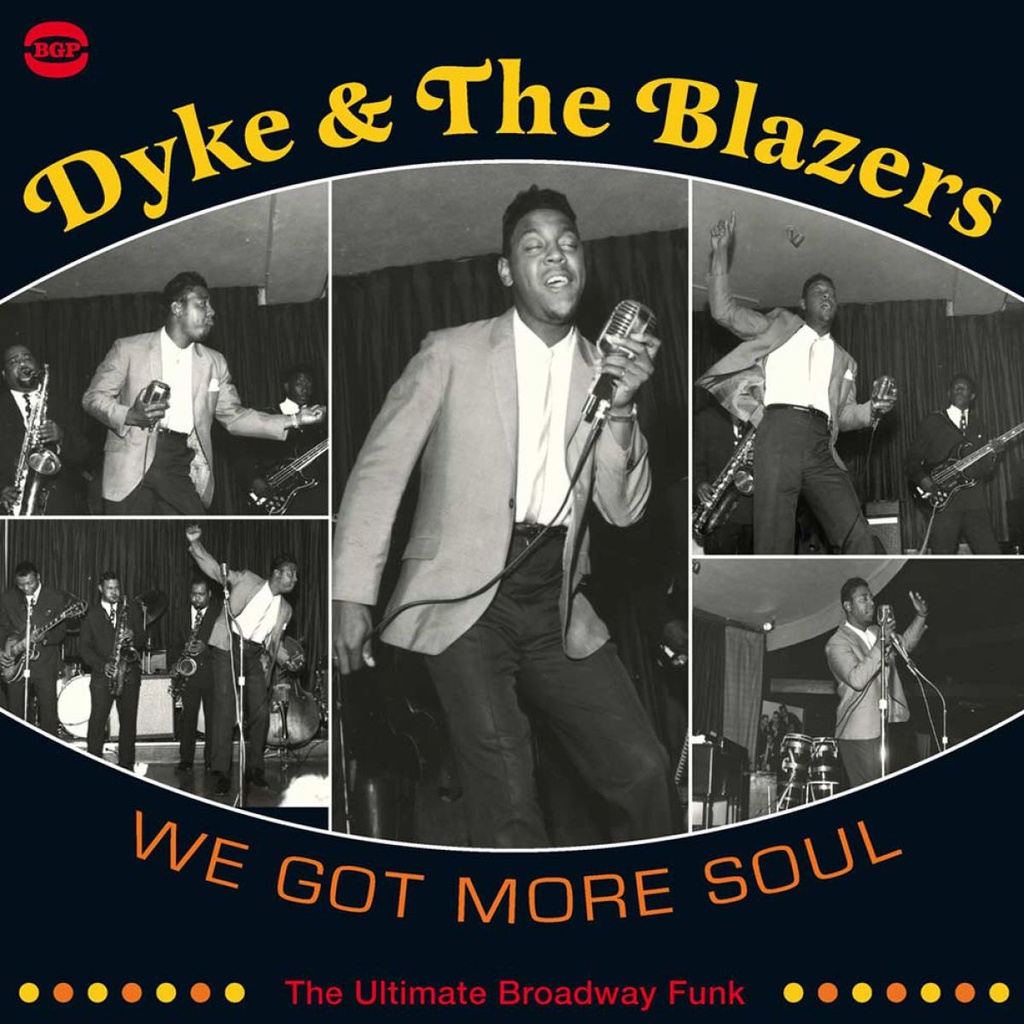 Dyke And The Blazers, We Got More Soul

Dyke & the Blazers, from Phoenix, Arizona, with their raw-voiced, street-hip frontman, were about as natural and unpolished an act as could be found in the mid-1960s R&B charts. While Dyke didn’t invent funk, he surely brought it to fruition, and along with James Brown - who considered Dyke a serious rival at one time – provided the most tangible building blocks for the emergence of street rhythm in black music during the late 1960s.

Nevertheless, Dyke & The Blazers are given relatively short shrift in the history books. Hardcore 60s soul aficionados don’t tend to favour the records, finding the Dyke sound too coarse and repetitive. He is also surprisingly absent from most funk surveys, usually mentioned solely as a footnote for introducing the word ‘funky’, with the later, genre-defining singles ignored. And to the mainstream, Dyke & The Blazers are barely considered more than one-hit wonders. Funky Broadway is still better known in the United States as a Wilson Pickett oldie.

Dyke, born Arlester Christian, burst onto the national scene in late 1966 with the ear-catching debut Funky Broadway. It was not a major hit – the record was far too raw and uncouth for that – but it proved a tremendously influential and long-lived item amongst black audiences. A slew of fine dance-orientated records made in Phoenix ensued. His Los Angeles recordings provided more chart entries, such as We Got More Soul, but also begat the discs that are now much-sampled classics, including Let A Woman Be A Woman – Let A Man Be Man. Just as Dyke’s career was peaking, he was murdered. He lived for the street and he died on it.

Kent Records has had a fine Dyke & The Blazers compilation, “So Sharp!” (CDKEND 004), on catalogue for many years. When I gained unprecendented access to the tape library of Original Sound Records, the venerable LA indie founded by Art Laboe, my first action was to make a bee-line for the Dyke masters, desperate to find more material by one of my favourite acts. WE GOT MORE SOUL is the complete Dyke & The Blazers recordings, 1966-70, all liberated from that previously locked vault. The 2-CD set is neatly divided between Dyke’s sojourn in Phoenix with the original hit-making line-up of the Blazers, and his later sessions recorded at Original Sound in Hollywood, when the singer’s sidemen were the incomparable Watts 103rd Street Rhythm Band.

Art Laboe had said that he had trimmed down most Dyke & The Blazers singles for release, and so I carefully examined the multi-tracks to find the original jams. It proved a challenge, as the Hollywood sessions were all cut on 1-inch 10-track tape, an unusual format that Art and original Sound engineer Paul Buff had pioneered in the mid-1960s. Thankfully the same machine that had been used to record the sessions has survived, and after firing up the huge old behemoth, I cued the tapes, and got to revel in funk history in the making. Now we can all hear the full-length, unedited, unexpurgated takes, exactly as they were run down live in the studio. Classic items like Stuff, Funky Walk, Funky Bull and Runaway People are often twice as long as originally presented. Additionally, I found fourteen unissued titles, ranging from downhome R&B grooves such as Swamp Walk and Extra Funk, to dead-on-the-one funk workouts like Booga Jivin’ and Let’s Do It Together, that really should have been released at the time. Dyke’s socially conscious, street-hip side comes through loud and clear on superlative numbers like Moon and Black Boy.

A lot of time was spent on perfecting this release by me and the good folks at Ace Records, but in particular the heroic boffins at Sound Mastering Ltd, who toiled long and hard to get everything to sound appropriately funky. Dee jays, don’t forget to pick up the vinyl version too, and the singles, which feature alternate takes. It’s a lot of music – and the CD booklet reveals as much as you’d ever need to know about Dyke and his Blazers – but while the funk-obsessed delve ever deeper into the arcane by-roads of obscurity and esoterica, this long-overdue compilation proves that, while the records may not be particularly rare, Dyke cannot be ignored.