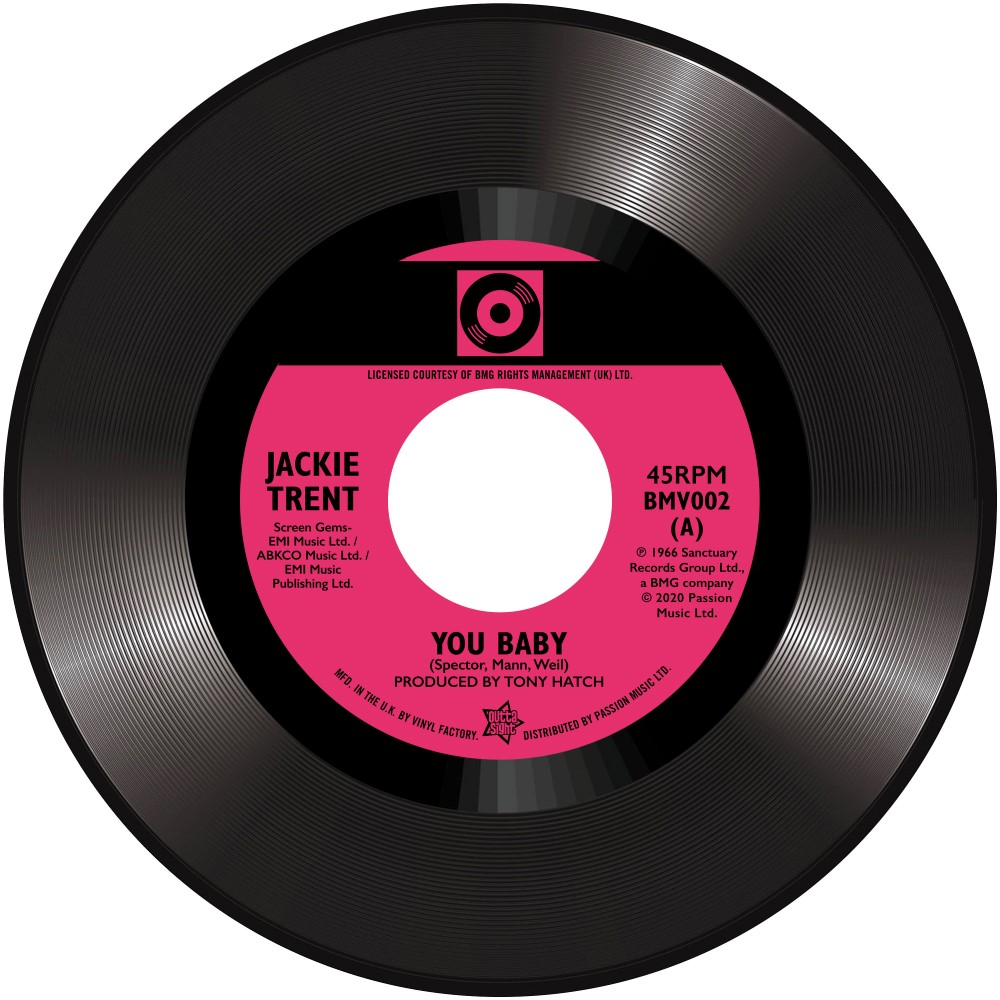 MASSIVE DEMAND EVEN AFTER 50 YEARS!

It all starts with a great song and “You Baby” has it all! Penned by husband and wife team Barry Mann and Cynthia Weil with the magic touch of Phil Spector – what an awesome trio – and the bedrock of a future classic.

The song was originally produced by Spector for the Ronettes, signed to his Philles label, and appeared on their 1964 breakthrough album ‘Presenting The Fabulous Ronettes’ featuring, of course, his wife to be Veronica Bennett. The song was also recorded in the U.S. by pop/rock band the Lovin’ Spoonful for their 1965 debut album ‘Do You Believe In Magic’.

However, in January 1966 Pye Records unleashed JACKIE TRENT’s epic Northern Soul version produced by her husband Tony Hatch. Heralded by a pounding drum beat and trumpet blast it is no wonder that Jackie’s definitive cover shook the walls at Wigan Casino a decade later. And its popularity has never gone away, hence its current price tag of £300-400! Check out Jackie’s performance on the Morecambe and Wise Show on YouTube, what an intro!

“You Baby” was also recorded in May ’66 by Cameo Parkway’s Lovenotes in a very similar vein and in November ’66 by the legendary Len Barry. Other notable cover’s include Sonny & Cher, the Bubblegum pop group Salt Water Taffy and, in 1975, John Holt’s reggae version.

“Lost Summer Love” was originally recorded in 1964 by U.S. actress Shelley Fabares known for her long-running role as Mary Stone in the sitcom ‘The Donna Reed Show’ and as Elvis Presley’s leading lady in ‘Girl Happy’, ‘Spinout’ and ‘Clambake’. She also scored a No.1 pop hit in 1962 with the teen anthem “Johnny Angel”. But, as with our ‘A-side’, it was reborn as a Northern Soul classic when Pye Records picked the song up in 1965 and recorded it on their latest signing, teenager LORRIANE SILVER. Once again the stomping drum track, percussion and handclaps propel you to the dancefloor where you’re greated with an unforgettably catchy tune, a bevvy of backing vocals and Lorraine’s effervescent vocal.