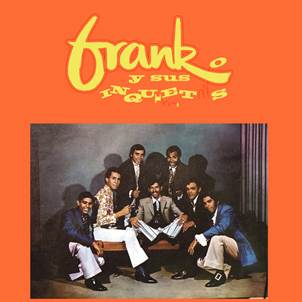 Venezuelan aggressive guaguanco originally released in 1967 and reissued for the very first time.

Frank y sus Inquietos is a little-commented Venezuelan treasure in our time, an amazing, almost unknown jewel of Venezuelan hard salsa, treasured with zeal by music lovers of all times. This group is evidence of the musical communion of the young Caracas of the late sixties with the sounds of the Caribbean in their nascent marriage with urban aggressiveness.

As a result of these meetings of “friends who played instruments” such as congas, bongos, piano, timbales and their fiery discharges on the top floor of Block 3 of La Silsa, a building located in this humble and highly populated Caracas popular area, the repertoire of songs by the homonym Frank y sus Inquietos (1969), with an exquisite imagination and brimming with vitality, authentic vocals and choirs, overwhelming percussion, strong bass and fierce piano conducted by Frank González.