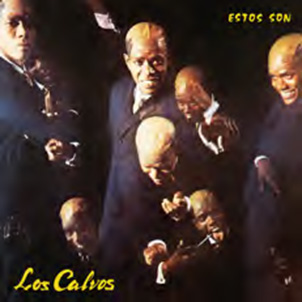 A1 El Kenya
A2 Mi Salsa Llego
A3 Yo El Director
A4 Que Pasara
A5 Yo Sin Ti
A6 El Negrito Calaven
B1 Bailemos Kenya
B2 Oigan Guasanco
B3 Tranquilo, Tranquilo
B4 Comiendo Pan
B5 Cariñito
B6 Te Vieron Con Otro

Few have done as much for salsa in Venezuela as band-leader, composer and pianist Ray Pérez. He burst on to the scene in the mid-60s with his group Los Dementes, creating the blueprint for guaguanco, pachanga and boogaloo in Venezuela. When the name salsa began to be used as something of a catch-all-term he was still at the forefront, recording two hugely-popular salsa albums with Los Dementes in 1967. Remarkably, that very same year, he also recorded two albums with a brand new group, Los Calvos, that showed how as well as being the genre’s most visible band-leader, he was also pushing the nascent genre to its limits. Looking back, revered journalist Alfredo Churion states that Los Calvos were “one of the most innovative experiences in Venezuelan popular music.”

Estos Son Los Calvos is the first of the two albums he made with Los Calvos. On it, he made a few alterations to the line-up that may seem minor, but created a completely new sound. For the first time, he recruited a drummer (unprecedented at the time for a salsa ensemble, which always used percussionists), he switched from the trombones of Los Dementes to the much harder, direct sound of trumpets, and he recruited Carlos Yanez, best known as El Negrito Calavén, as singer. Whereas Los Dementes had been aligned with the slightly pop sound of tropical orchestras, Los Calvos took an almost-jazz approach, allowing room for the musicians and vocalists to improvise, and they also took inspiration from the sounds of surf rock swirling around Caracas. The group’s drummer El Pavo amusingly once described the group’s sound as like “wearing a dinner suit with flip-flops”.

Opening track “El Kenya” is the clearest example of that surf rock influence; it’s opening lines make clear its intentions: “una linda trigueña que me invitó a bailar el Kenya” (“a beautiful trigueña – tri-ethnic girl – invited me to dance the Kenya”). They are intent on creating their own dance craze, El Kenya. If the group had ever performed live, then maybe it would have taken off, as the song had all the credentials: rollicking montuno piano from Pérez, ingenious scatting and vocal improvs from Calavén, and a middle section where the drums and trumpets battle it out hard, with an audience screaming its appreciation throughout. It’s followed by ‘Mi Salsa Llego’, which Pérez had already recorded with Los Dementes; here, it’s a tougher beast, the sparser hits of the drums and trumpets giving a harder sound evocative of the times, with more and more people moving to the cities, and wanting a grittier, urban soundtrack.

The secret weapon in Los Calvos was the fact that this was a group made up of some of Venezuela’s finest musicians, many of which, Pérez included, had working class roots. Music for them was as much a part of their day-to-day lives, as it was a profession, it was what they did. The legendary Frank “El Pavo” Hernandez was on drum kit, with revered names like Alfredo Padilla, Carlos “Nene” Quintero, Pedro García, Miguel Silva, Enrique Vazquez, Rafael Araujo and Luis Lewis, also involved in the group. Their versatility allowed Los Calvos to go from the slower, haunting groove of “Negrito Calavan”, a showcase for their singer to improvise, and on to “Bailemos Kenya”, another attempt by the group to create their own version of “The Twist”!

Los Calvos never played live, but that was always the intention. Pérez was in demand by the record labels of the time and his deal with RCA Victor to make two albums as Los Calvos was only ever that. But the spirit of Los Calvos remained when Pérez then formed Los Kenya, whose name came from the opening track of this album, and whose line-up featured the same inventions as Los Calvos, with a drum kit, two trumpets and the same vocalists (for their second album, Carlín Rodríguez joined as a singer, and remained for Las Kenya). For this reason, Los Calvos would never have the same successes as Pérez’s other groups, though even Pérez has revealed in interviews that the two albums he made as Los Calvos are some of the most fun he ever had recording. With the price of originals for both albums ever increasing for vinyl collectors, this is a great chance to get hold of two of the heaviest salsa albums ever issued in the 60s, and an important moment in the life of Venezuela’s salsa king, Ray Pérez.