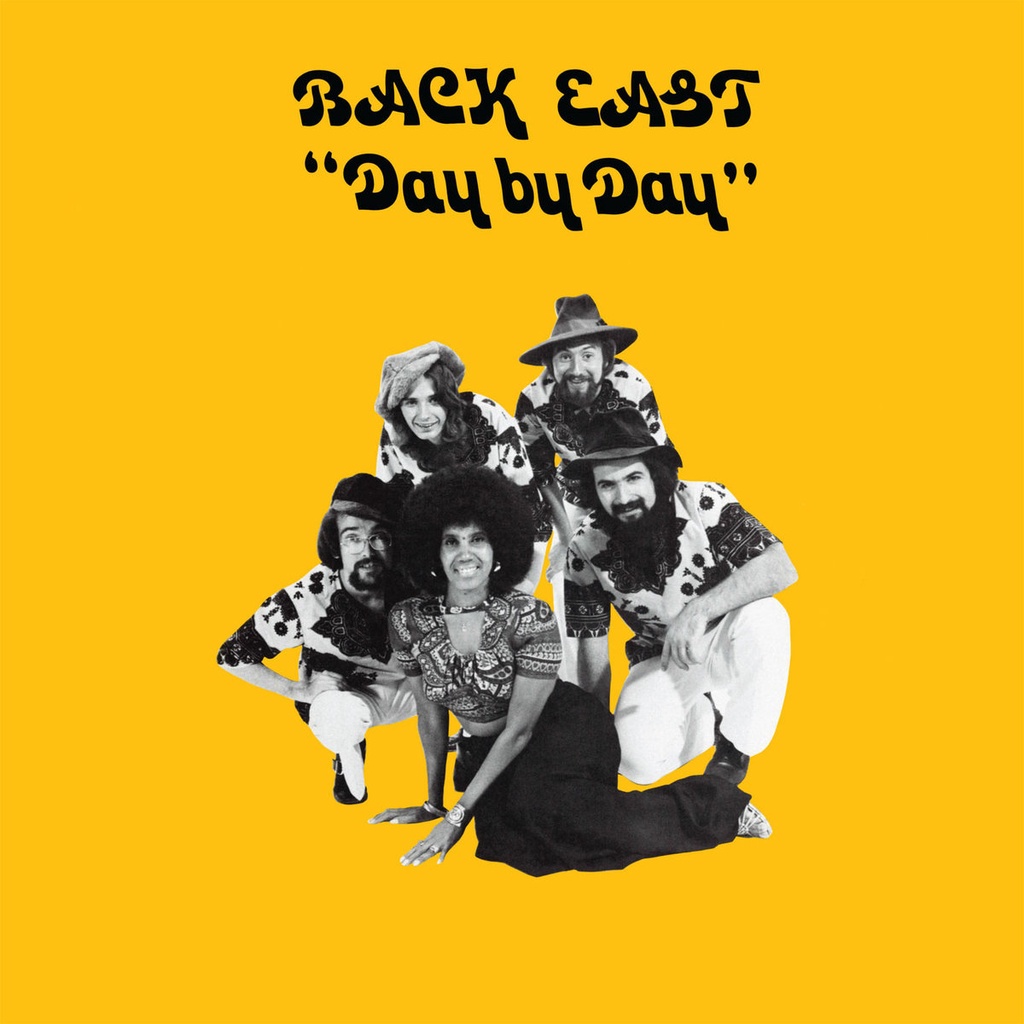 Back East, Day By Day

A masterpiece in the field of dreamy psyche pop that should have been issued five to seven years before. THE FIFTH DIMENSION might be a comparison but there is more. Jazz is one of the basic elements here, dreamy colorful pop and soul music are the others. The mixture is exciting despite it’s relaxed atmosphere. All thrillers here on the song front, great coverversions included turned into this band’s very own songs.

There have always been countless music acts that appeared and disappeared within the wink of an eye in whatever style and scene one can imagine. And not only since the independent record label became a trendy way to release albums in the 1980s, but also way before already. One small label effort was “Day by day”, the only album by American band BACK EAST, at least I consider it a band as the music has this natural flow and great feeling. That’s what I call a sweet obscurity: recorded in 1974 and released in 1975, original copies fetch prices up to 300 US$ and I am really happy that EVERLAND MUSIC gave it a proper reissue finally, for this album is worth being known by a wider audience. It starts with “Love song”, a dreamy soul pop tune with an addictive vocal melody and very gently sounding arrangements. The song proclaims that “Love is the only thing” and I agree with BACK EAST. Next comes a freaky BEATLES cover “Norwegian wood / Eleanor Rigby” and while many bands either just replay the original with no creative input of their own, BACK EAST make both BEATLES classics their very own and fuse them into a haunting piece of music. Slightly jazz influenced Latin pop joins the colorful dance in shape of a song named “Corazon”. Next on the list are coverversions of “You are the sunshine of my life” by Stevie Wonder and “Reach out (I’ll be there)” by THE FOUR TOPS with the first one being at least close to the original melody wise, only a bit slowed down with a more dreamy atmosphere, the latter one has been made their very own once more. Slowed down, softened but still with the depth of utter devotion to the cause of the song. The jazzy arrangements in all these songs, the swirling piano and slightly uneven beats build the hooks which will moor each song within your soul. We reached the End of Side A and turn over the piece of vinyl and face a chanson of the highest order with a melody so bittersweet that it will bring tears to your eyes. It gets a more pop oriented expression towards the chorus but it stays deeply melancholic throughout the whole duration. “I’m gonna love you just a little more Baby (deeper and deeper)” is also a rather soft and dreamy pop song with female vocals and the male singer joining in during the chorus. It has this flowery late 60s atmosphere that brings pictures oft he Woodstock Art and Music Fair to my mind, but also shows a certain urban club feeling. All in all a very relaxed song that gets slightly more energetic later on with a cool organ solo in the middle section. “Zanzibar” then has a rather exotic title and a thrilling, dark atmosphere. It comes as an up paced exotic jazz number with the piano as leading instrument. And it falls out of place actually for it drags you back to the late 1950s sound and performance wise. But the electric guitar tells us it is not that old by the time of it’s release. Anyway, this song stands out as a welcome oddity on this actually rather dreamy pop album and wakes you up with it’s sheer intensity. Still a catchy tune despite the jazz influence. But soon after we fall back into the dreamy state. “Summertime”, the world famous Gershwin composition has been transformed into a playful, yet relaxed jazz pop tune with amazing female vocals. The lead melody stays as it is, just the arrangements differ to other well known coverversions such as the one by THE ZOMBIES. A lengthy instrumental section with more uneven rhythms and great dialogue between guitar and piano makes this one a truly awesome interpretation of a classic tune. In the middle section the song takes a new direction for a moment that even brings to mind some atmospheric psychedelic pop music from around 1967. And it moves me, it deeply moves me. The title track then closes the album with an engaging latin rhythm (mambo, I believe) and upon this upbeat groove an intriguing vocal melody. Jazz and pop flow gently into another on this album, it sounds like swing being upgraded by adding then modern soul pop to the cocktail. And this cocktail is highly addictive. A really mellow and gentle album with only a few more energetic moments, but it comes with a deep and thick atmosphere that brings pictures to your mind. I have not heard many records that were that beautiful in the true sense of the word. I wonder why this album sank nearly without a trace to become such a collectors item, while it should have been an evergreen among fans of soulful flower pop.