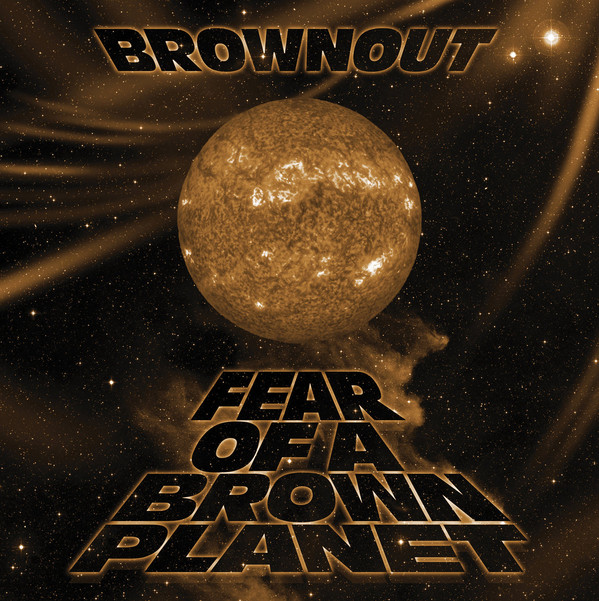 Brownout, Fear Of A Brown Planet

Twenty-eight years ago, pissed-off twelve-year-olds around the universe discovered a new planet, a Black Planet. Public Enemy’s aggressive, Benihana beats and incendiary lyrics instilled fear among parents and teachers everywhere, even in the border town of Laredo, Texas, home of the future founders of the Latin-Funk-Soul-Breaks super group, Brownout. The band’s sixth full-length album (out May 25th) Fear of a Brown Planet is a musical manifesto inspired by Public Enemy’s music and revolutionary spirit.

Chuck D., the Bomb Squad, Flava Flav and the rest of the P.E. posse couldn’t possibly have expected that their golden-era hip hop albums would sow the seeds for countless Public Enemy sleeper cells, one that would emerge nearly three decades later in Austin, Texas. Greg Gonzalez (bass) remembers a kid back in junior high hipped him to the fact that Public Enemy’s “Bring the Noise” is built on James Brown samples, while a teenaged Beto Martinez (guitar) alternated between metal and hip-hop in his walk-man, and Adrian Quesada (guitar/keys) remembers falling in love with Public Enemy’s sound at an early age. “When I got into Hip hop, I was looking for this aggressive outlet . . . and I didn’t even understand what they were pissed off about, because I was twelve and lived in Laredo . . . but I loved it and I felt angry along with them.”

Joseph Abajian (Fat Beats’ owner) must have sensed the deep hip-hop well lying beneath the versatile band’s Latin-Funk veneer. “I thought their sound would work covering Public Enemy songs,” Abajian says, and, “it was good to know they were P.E. fans . . . We came up with a track listing and they went to work.” Despite the band’s eagerness to work on new original material (an album of original songs is slated for next year), they couldn’t pass up the opportunity to pay homage to this iconic and influential posse.

Translating sample-based music to a live band turned out to be more of a challenge than they anticipated. Adrian tried to get inside the Bomb Squad’s [Public Enemy’s producers/beat-making team] head in order to find the inspiration to reinterpret P.E.’s songs: “imagine the Bomb Squad going back in time and getting the J.B.s [James Brown’s funky backing band] in the studio and setting up a couple analog synths and then playing those songs.” While some songs closely follow the original musical blueprint, others use the source breakbeats as jumping-off points later sweetened by Trombonist Mark “Speedy” Gonzales’ horn arrangements, synth wizardry courtesy of friend-of-the-band Peter Stopschinski, and DJ Trackstar’s turntable scratches. But don’t listen expecting to hear paint-by-numbers recreations of classic Public Enemy jams. “Our approach is never in the tribute sense,” Adrian explains. “We’ve always taken it and made it our own, whether it’s the Brown Sabbath thing or this Public Enemy thing.”

Coming off numerous tours as Brown Sabbath and even a stint backing the late legend Prince, Brownout is arguably the tightest and funkiest band on the road today and they’re psyched to bring this revolutionary music to the people. For a band without an overt political agenda, they collectively couldn’t resist the opportunity to play this music live, especially now. “If there’s any way that we can use the already political and protest nature [of P.E.’s music], we would like to try,” Beto says. “The album’s title, Fear of Brown Planet is definitely a relevant idea today and we’re not afraid to put it out there, because we want to speak out.” By reinterpreting these hip hop classics in their unique style and channeling the spirit of Public Enemy that first echoed around the world and captured their imaginations all those years ago, Brownout is doing exactly that.