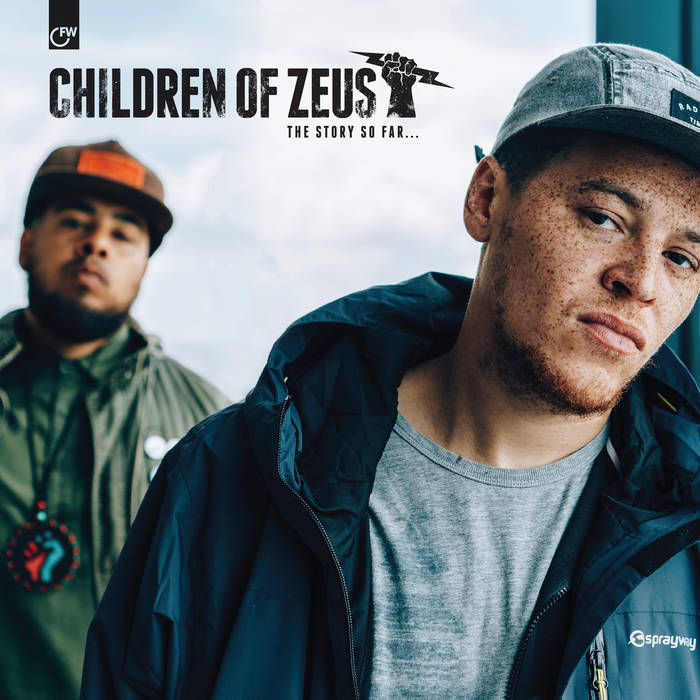 A1 Smoke With Me

B2 No Sunshine Tomorrow

First Word Records are very proud to present an EP by Manchester's finest Hip Hop and Soul exports, Children of Zeus. This is 'The Story So Far…'

Konny Kon & Tyler Daley met back in 2005, after both performing a show near Paris in their respective crews, Broke'N'£nglish and Body Roq. The duo met up back home in Manchester, spurred on initially by a mutual admiration of each others music, and produced their first track together, aptly entitled 'Coming Home To You'.

A few years later, Tyler approached Konny about producing a full EP together. These sessions included the creation of a track called 'Still Standing', which ultimately saw the light of day last Summer on First Word. Still a highlight in their live sets, the Lenzman rub won "Best Remix" at the 2016 Drum & Bass Awards. The original has become somewhat of a British Soul anthem since its release, with people that missed it first time round still clamouring for it on wax. So we've included it on this EP.

As they've grown within the family of Manchester's music scene, they've provided a tonic to the city's bass-orientated club scene, breathing Soul back into the city, whilst maintaining their heritage of Hip Hop swagger. As an MC, Konny takes no prisoners, whilst Tyler (a prolific MC in his own right) has gained a rep as one of the UK's strongest Soul voices. Both artists have been blessed with the talent of beat-making. A combined craftsmanship upon the boards and in the booth.

From building a grassroots following of fans, they've since travelled the globe, sharing stages with giants and catching the ear of peers far and wide, from Pete Rock to Zed Bias. As well as hosting their own monthly radio show on NTS, they've collaborated with numerous Hip Hop acts, both sides of the Atlantic, as well as Soul royalty in the form of Caron Wheeler and Drum'n'Bass legends, such as Goldie (Tyler featuring heavily across his latest album).

Children of Zeus have finally begun the process of crafting together their debut album. This EP is a compilation of the creations the duo have produced themselves over the past decade, put together to appease their loyal followers thus far, and as an introduction to those yet to discover their talents. A snapshot of what has been, and a mere taster of what's to come. It features brand new tracks such as 'Smoke With Me' and (vinyl-only cut) 'Tonight', the anthemic 'Crown' (featured on First Word's 'Two Syllables' compilation previously) and fan favourites such as 'No Sunshine Tomorrow' and 'Push On'. A collection of raw, gritty, Hip Hop Soul music.