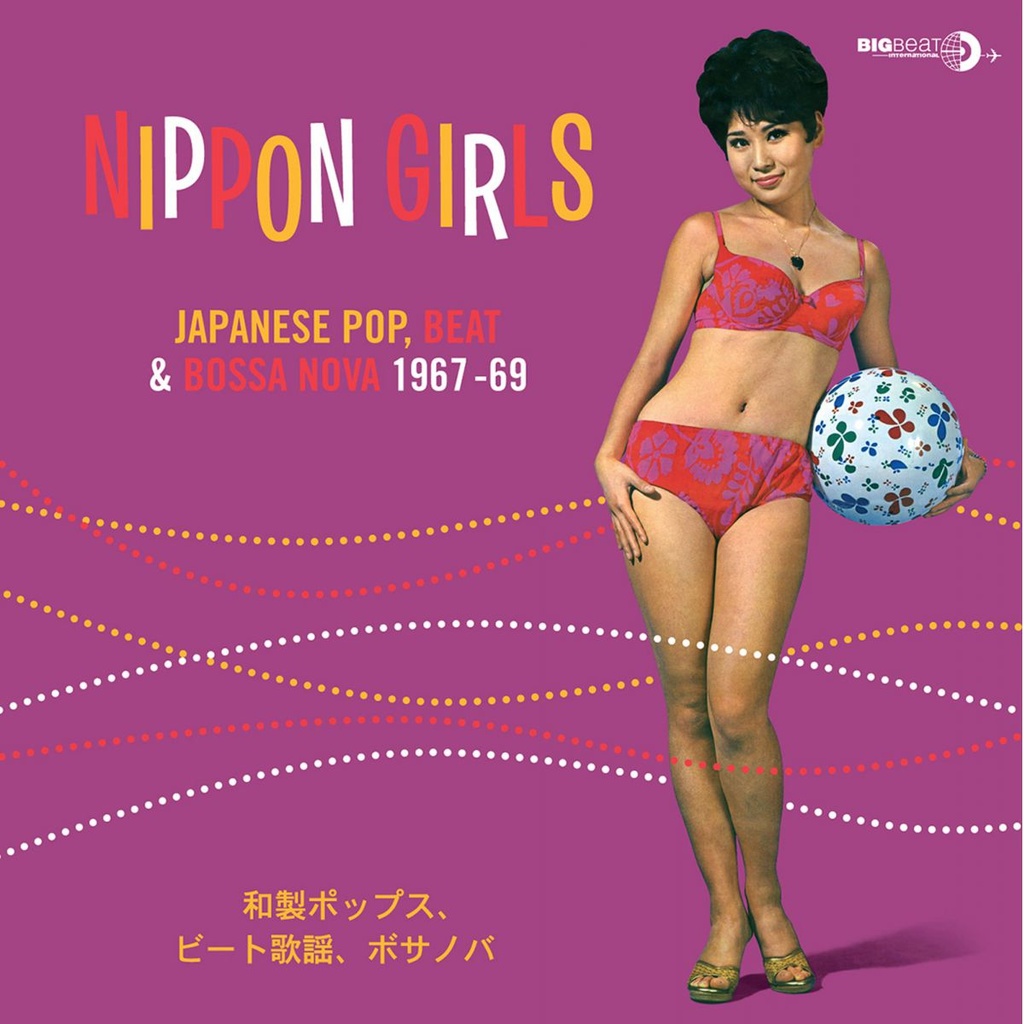 This month marks the launch of our new HIQLP series of superior quality 12-inch albums pressed on 180g vinyl and packaged in heavy-duty sleeves.

By popular demand, the series kicks off with “Nippon Girls”, a celebration of the female side of Japan’s 1960s pop scene. The LP comprises a dozen highlights from the CD of the same title issued on our Big Beat International logo a couple of years back, one of our recent top sellers. Compiled by DJ Sheila Burgel, a former Tokyo resident, the “Nippon Girls” CD raised a few eyebrows here at Ace HQ, but girl-pop maven Sheila knew what she was doing. The collection drew rave reviews, becoming something of a left-field hit with the club crowd and young hipster types.

Sheila also supplied the fascinating and scholarly liner notes, from which we learn that bikini-clad cover girl Jun Mayuzumi’s ‘Black Room’ “boasts booming bass lines and a dancefloor readiness that’s already caught the ear of freakbeat collectors, while Mie Nakao’s fuzz-rocker ‘Sharock No. 1’ takes ‘Green Onions’ as its template. ‘Tsukikage No Rendezvous’ by Keiko Mari is a tamer affair, with Latin rhythms and cute banter between Mari and her all-male chorus. J Girls were sisters Shinobu and Jun Hazuki. Their ‘Kiiro No Sekai’ was recorded in 1969 but remained under wraps until 1995’s “Cutie Pops Collection”. Reiko Ohara’s ‘Peacock Baby’ was released in 1968 and came in a mouth-watering gatefold sleeve. Mieko Hirota was a music heavyweight, close to Dusty Springfield in the ability to inspire awe with her voice. In the mid-60s, she was paired up with Kyohei Tsutsumi, one of Japan’s greatest pop writer/producers. His love of Anglo-American records is clearly audible on ‘Nagisa No Tenshi’, its backing track not very subtly swiped from ‘Cool Jerk’.”

The second side makes for an equally compelling listen. Opener Rumi Koyama was “a go-go dancer for TV show Beat Pops. Her debut single is rather square, but its jazzy flip ‘Watashi No Inori’ is just the right amount of raw and teenage. A year after the Carnabeats hit paydirt with a reading of the Zombies’ ‘I Love You’, re-titled ‘Suki Sa Suki Sa Suki Sa’, Nana Kinomi included the same song on her album “Let’s Go Nana!” with GS band Leo Beats. You can hear half-American, half-Japanese model Miki Obata struggle to hit the high notes on ‘Hatsu Koi No Letter’, but it’s considered a Japanese girl-pop staple. Ryoko Moriyama’s ‘Ame Agari No Samba’ attests to the high quality of Japanese bossa nova – as laidback and atmospheric as the Brazilian originals it emulated. Former figure skater Ayumi Ishida’s ‘Taiyou Wa Naite Iru’ is total melodrama, a whirlwind of harpsichord and strings. The star of over a hundred films, Sayuri Yoshinaga appealed to the Japanese mainstream with her modest image and ability to leave audiences in floods of tears. Her ‘Koi No Yorokobi’ is the perfect Japanese girl-pop primer – dark yet upbeat, with all-girl chorus the Schoolmates chirping in the background.”

“Nippon Girls” is highly recommended to girl group fanciers, GS groovers and anyone else with a keen ear for eclectic sounds. The LP version sports a zingy gatefold cover by designer Niall McCormack, who also created the 23-inch square poster found tucked inside.