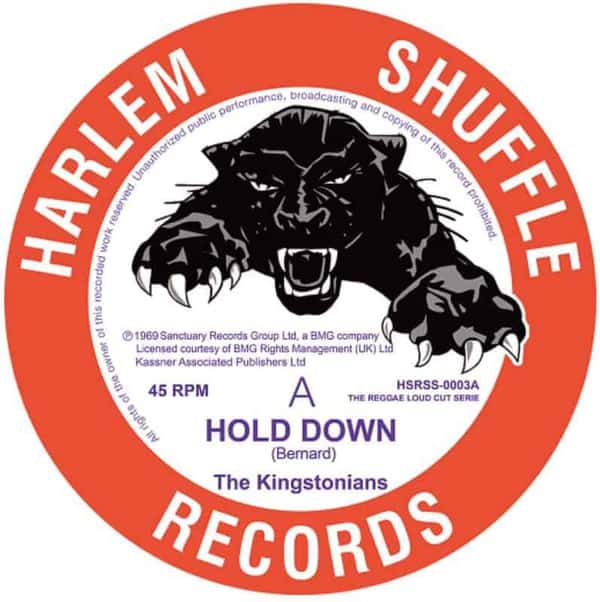 The Kingstonians, Hold Down / Nice Nice

These two avidly sought after early reggae tracks have been extracted from the 1970 “Sufferer” album. They are extremely rare on 7” vinyl and sought after by collectors and reggae fans alike. A mint copy of “Hold Down” can fetch over 500 Euros, if you can find one...

Jamaican vocal trio, the Kingstonians were formed around 1966 by Cebert Bernard (aka Jackie Bernard) and his brother Lloyd "Footy" Bernard, along with mutual friend Lloyd Kerr. They began their recording career with producer J.J. Johnson, but had their greatest success between 1968 and 1970 with producer Derrick Harriott, who helped steer the singles "Singer Man" and "Sufferer" to the top of the Jamaican charts. An LP of the Harriott material was released in 1970 under the title “Sufferer.” The album was the career high point for the Kingstonians, who left Harriott to work briefly with producers Leslie Kong and Rupie Edwards before breaking up as the roots reggae era began.

With “Hold Down”, The Kingstonians presented an outstanding track with great vocals, tight lyrics and a rhythm guaranteed to get those brogues tapping! This gem quickly became a genuine anthem right next to the likes of “54-46 Was My Number” or “Moon Hop” and yet has never been repressed on 7 inch vinyl.

On the B-Side you’ll find 1969’s single from The Kingstonians, “Nice Nice.” This is another cracking uptempo track, very typical of The Kingstonians & Derrick Harriott’s production at that time and a perfect flip side for the A Side anthem.