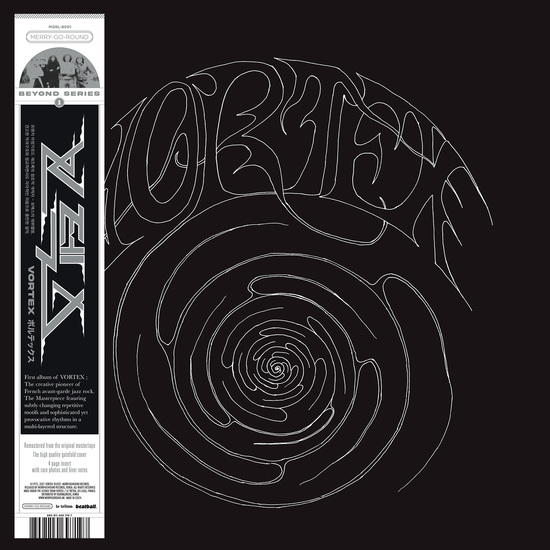 
VORTEX, a creative pioneer of French avant-garde jazz rock, who endlessly disassembled and reconstructed the genres, created their own unique style by blending various musical elements; such as the aggressive heaviness of Zeuhl, the complex yet elegant ensembles of chamber rock, the polytempic and polyrhythmic structures of free jazz and the profound experimentation of 20th-century contemporary music.

Like the swirling symbol adorning the cover, their first album has a dark and twisted emotion that seems to drag the listener into a labyrinth. Subtly changing repetitive motifs and sophisticated yet provocative rhythms are characteristic of the Zeuhl genre, but the ensemble of flutes, saxophones and Fender Rhodes electric pianos in a multi-layered structure seems closer to the element of Chamber Rock, a genre completed by Univers Zero and Art Zoyd a few years later. Considering the release date, it can be said to be a fairly pioneering attempt. The 14-minute song ‘Délicieuse Créature’, a compilation of free jazz improvisation, psychedelic rock, and expressionist experimentation, shows an epic aspect suitable for the use of theater music.

As an aside, the original LP of this album is considered one of the rarest albums of the Zeuhl genre, along with Magma’s 2nd, Eider Stellaire’s 1st, sole albums of Rialzu and Archaia.