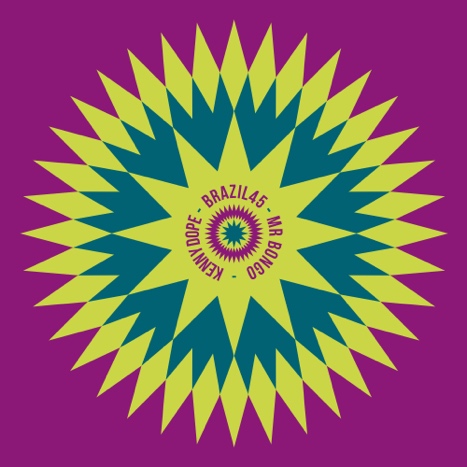 The long-running relationship between Masters At Work and Mr Bongo has been a fruitful affair. Beginning in the 90s, it has included releases such as their seminal 'Brazilian Beat' 12" featuring Liliana, their magnificent rework of Atmosphere’s ‘Dancing In Outer Space’, and their recent hit Surprise Chef remixes 12". The influences of Brazilian music is evident in their DJ sets and productions, take the poly-rhythms of the 'Nervous Track’ as a prime example. We couldn't think of anyone more fitting to curate the third volume in our "Brazil 45 Boxset Curated by" series than one half of the MAW duo, the mighty Kenny Dope.

For his volume of the series, Kenny selected 10 knockout tracks from the golden era of Brazilian music. As you would expect from such a legend, he surpassed the brief of simply compiling the tracks, as he re-edited and remixed a number of his favourites especially for this boxset. Amongst these exclusives is a blazing, heavy psych-funk remix of Antonio Carlos & Jocafi's 'Quem Vem Lá’, and a hip-hop breakbeat bounce woven into Luli Lucinha E O Bando's folky-MPB beauty 'Flor Lilás’. Di Melo and Miguel De Deus are also given the Dopeman remix and edit treatment.

Kenny's selections pull out some forgotten classics and recently overlooked gems, many of which were once top of the want-lists for collectors in the 90s. These include Milton Banana Trio and the irresistible version of 'Berimbao' by Jayme Marques. Along with the Brazilian funk and jazzy-bossa dancefloor-oriented tracks, Kenny has also chosen the leftfield, deeper, trippy psychedelic folk sounds of Papete.

As with previous volumes, the selections are very personal and represent the individual sound and taste of the selector digging from the rich tapestry of Brazilian music. Its unique palate and stamp are exactly what you would expect from a Master At Work.