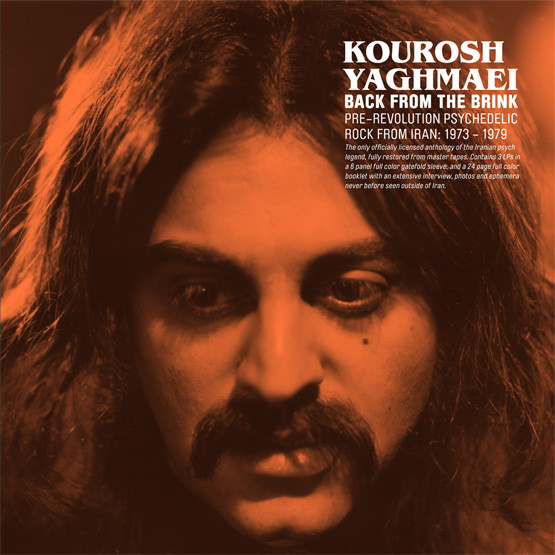 Kourosh Yaghmaei, Back From The Brink

Now-Again Records is proud to present Back from the Brink, the only legitimately licensed collection of the godfather of Iranian psychedelic rock, Kourosh Yaghmaei. Known within the Iranian diaspora simply by his first name, Kourosh’s Pre-Revolution recordings were thought lost after Islamic fundamentalists took control of Iran. They weren’t: Kourosh had protected them – along with key ephemera from the 70’s. Their collection here - spread over two CDs, a 3-1LP and a 4x7” box

set - bolstered by Kourosh’s first person recollections of Iran’s 70s rock scene and its death after the Revolution, tells the story of an immensely talented artist’s desire to persevere in the face of terrible adversity.

Kourosh Yaghmaei and his brothers Kamran and Kambiz were amongst the few inspired Iranian musicians determined to change Tehran’s musical landscape in the late 60’s and early 70’s. The trio, armed with rented, second-hand instruments and records by The Ventures, The Kinks, The Doors, merged Western garage rock, psychedelia and Iranian folkloric music to create a sound unlike anything that came before them. Later, inspired by the unlikely duo of Elton John and James Taylor, Kourosh’s music took a sophisticated turn, and he churned out funky, progressive rock that is as imminently enjoyable as it is impossible to categorize.

His star on the rise was knocked off course by the Revolution, and its backdrop of Islamic fundamentalists burning record companies and harassing musicians. But while most Pre-Revolution musicians – including his brothers – fled Iran in 1979, Kourosh stayed, loyal to the country of his birth. He has suffered a performance and recording ban for twenty-two out of the last thirty-two years. Yet he remains stoic and resolved to continue bolstering Iranian musical tradition.

Kourosh still lives in Tehran and is pleased that his story – and his glorious 70s recordings – will finally spread the world over.

This essential piece of Iran’s musical history is also accompanied by a full color book and contains never-before-seen photos and ephemera.