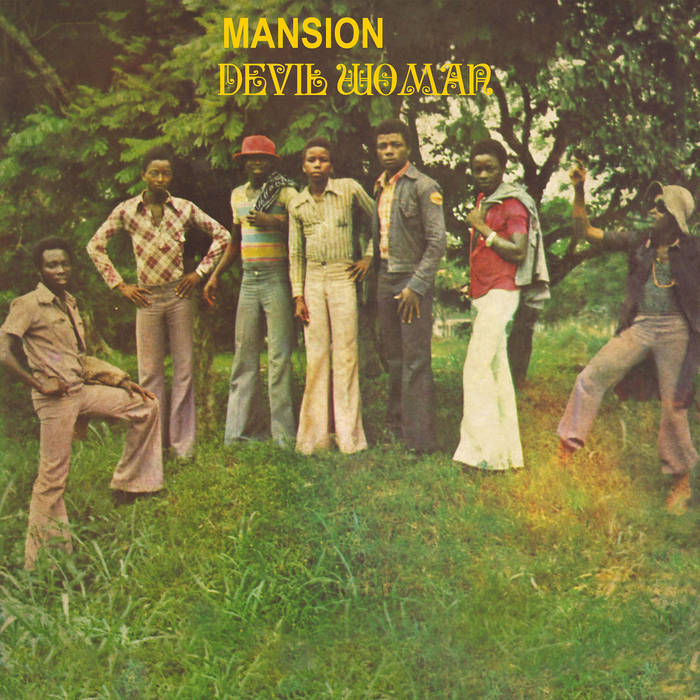 A1 The Love Song

A3 Don't Take That Love Away From Me

B1 Heaven Is Here On Earth

B2 You Can't Stop Us

B3 The Great Question

The eastern Nigerian city of Calabar in Cross River State was colloquially known as Canaan City ‘ a place of lush landscapes, alluring women and delicious cooking. When the Biafra War ended it became a land of milk and honey for bands as well, with jumping venues like the Taj Mahal and Luna Nite Club and a label called Clover, set up local entrepreneur Ben Okonkwo, releasing albums by bands like The Doves, The Visitors, Aktion and The Apostles. The youngest band on the Clover roster was Mansion, a teenage highlife group, led by singer and bassist John ‘Holy Mountain’ Ebiong. Okonkwo decked them out in flares, repackaged them as a funk band and put them in the studio with EMI super-producer, Kayode Salami. The result was Devil Woman, an astoundingly assured funk/rock album. The title track revels in a ’60s psychedelic vibe. ‘The Love Song’ is a direct appeal to teenage hearts. ‘Heaven Here On Earth’ has an irresistible shuffling groove while ‘You Can’t Stop Us’ is what James Brown would have sounded like if he’d been born in the Cross River State. Devil Woman is an album designed to set young hearts aflutter and draw approving nods from seasoned musicians. It succeeds in both. – Peter Moore