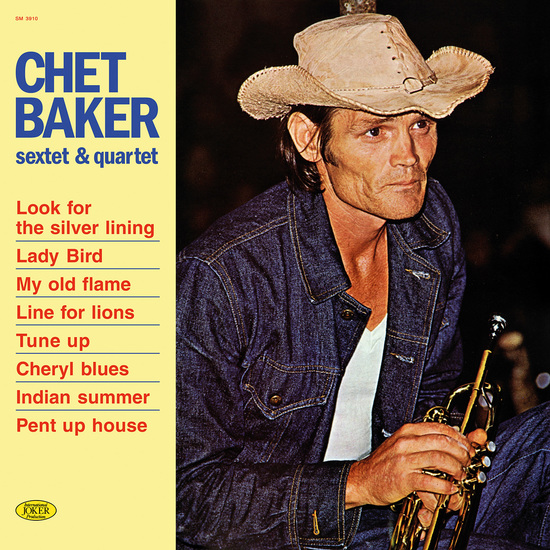 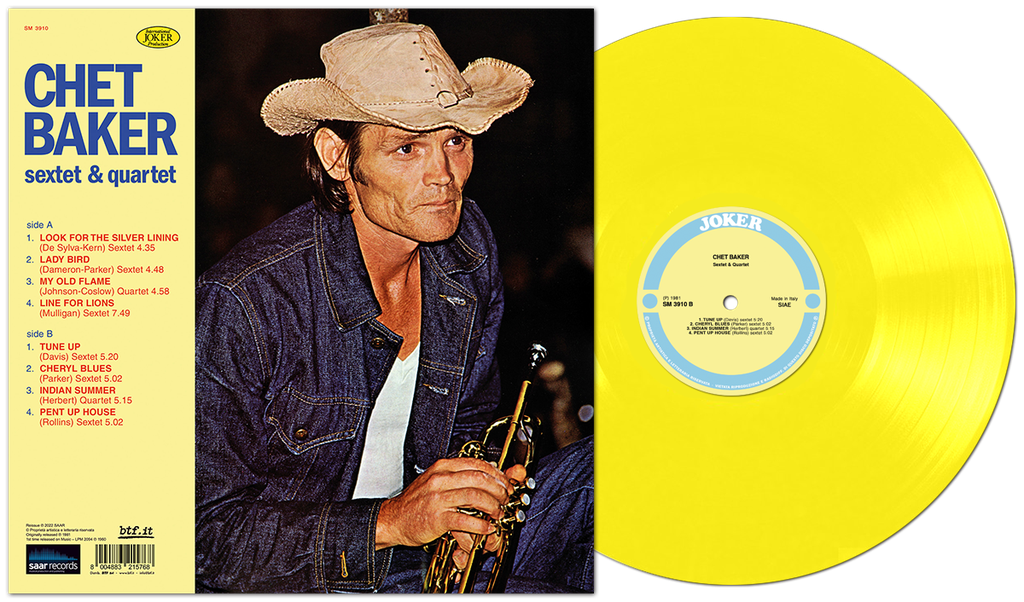 LITA EXCLUSIVE: Yellow Vinyl
Originally released in 1960
Second LP made with Chet Baker and his sextet and quartet

SAAR Records reissued on vinyl and with its famous label Music, the second LP made with Chet Baker and his sextet and quartet, the vinyl was first released in March 1960. One of the rare occasions presented to our musicians to meet an American trumpeter for quite a long time was stopped and collected in this LP. It is Chet Baker who for several months chose Italy as a country of residence and life and after having traveled far and wide, he found a way to restore himself to health and to leave several documents of his genius and its artistic possibilities. Chet’s trumpet is now legendary. Baker is one of the most important and decisive figures of modern jazz and over the years he has not lost his polish and color. This LP amply demonstrates this and indeed presents us with a rather modified Chet Baker. Chet’s sonority has become less thin, more concise, more precise, more violent. Several songs on this record are proving it. In short, the Italian musicians made a crown with precision, spontaneity and a lot of warmth and ended up dragging Chet Baker into insolite and more heartfelt expressions. Chet Baker was in fact surrounded by two Italian musicians, the alto sax Glauco Masetti and the tenor sax Gianni Basso who in their long career as jazz enthusiasts and musicians, have always given their best and on this occasion they wanted to set a new range in the series of their engravings. The rhythm section has also been entrusted to a Renato Sellani who, in the meager essentiality of his pianism, knows how to draw the nuances necessary to make each of his interventions valid both as a soloist and as an accompanist. Franco Cerri’s support on double bass is powerful, precise and full of swing, while that of Gene Victory the Italian-American musician on drums is adequate. Giulio Libano is the author of the arrangements of all the recordings for the sextet and has the great merit of having prepared simple and linear arrangements, that have left ample room for soloists to improvise. Chet Baker in fact has the preeminent position of the guest of honor, but also the other musicians in their choir part in a very precise alternation. But here is the distribution of the solos in the individual songs: Look For The Silver Lining – Chet Baker begins with a long solo that consists of the exposition of the theme, of two very well varied choruses marked by a series of stops, followed in order by the solos of Masetti, Basso, Sellani. Chet Baker closes by resuming the exposition of the theme on long notes.

Lady Bird – after a collective start in unison, Chet Baker begins the series of solos with a rather bright and violent sound, making extensive use of high notes. The solos of Basso, Masetti and Sellani follow. A four bar chase in turn precedes the final collective.

My Old Flame – the recording, performed by the quartet, is taken on a very slow tempo. It basically consists of three solos in this order: Chet Baker, Sellani, Chet Baker. The swing imposed by Franco Cerri is particularly highlighted.

Line For Lions – the famous standard of Mulligan is taken on a fast tempo: a long solo by Chet Baker, then Basso, Masetti, Sellani, Cerri, the usual chase of four bars in turn and finally the final unison.

Tune Up – runs almost on the standard routine of the other themes performed by the sextet: unison, Chet, Masetti, Basso, Sellani, chase of four bars in turn, final unison.

Cheryl Blues – Parker’s recording takes on particular evidence in an arrangement construction very similar to that of the be-bop recordings of the Gillespie Parker times. Also in this case: unison, Chet, Basso, Masetti, Sellani, final unison.

Indian Summer – taken on a slow tempo by the quartet, the recording has its own particular and well centered atmosphere. Chet Baker performs there in one
of his most valid and thoughtful solos. The recording, like the previous one of the quartet, is formed by: Chet Baker, Sellani, Chet Baker.

Pent Up House – on the not elaborate motto, but nevertheless effective, a recording by Sonny Rollins, Giulio Libano has set up an arrangement that starts from a dry and decisive unison, followed in order by Chet, Basso, Masetti, Sellani. A short chase of four bars in turn, ending at the cut, 24 bars in all, then the last eight bars in unison.