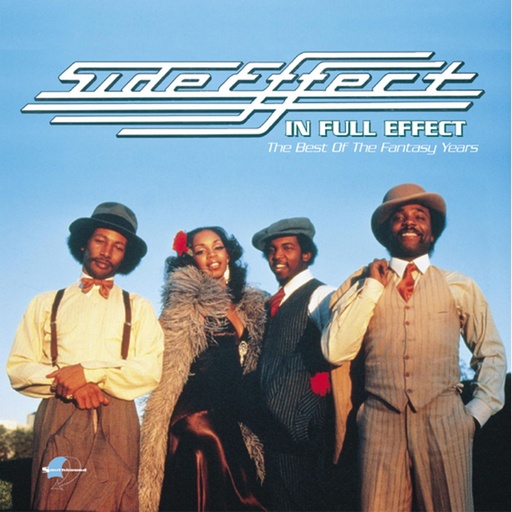 Side Effect, In Full Effect - The Best Of The Fantasy Years

As a long-time fan of Side Effect, I was both pleased and slightly disappointed when our friends at Fantasy Records paired the group's first two albums on one CD last Autumn. Pleased, because it meant that some kind of representation of this great group's recordings was at last going to be available on Compact Disc. Disappointed, because I'd been working on my own Side Effect anthology for Ace - for some six months prior - which would bring together all the group's most acclaimed dance cuts and sublime soul ballads in one 79 minute CD. I feared that, as a result of said "toofer" creaming off potential sales, said anthology might not now see the light of day...

...Happily, though, the bi-product of the previous CD release was that it brought new fans to the table, all of whom were asking Ace if there was any more where it came from. And with the release of IN FULL EFFECT, Ace is delighted to confirm to you that yes, there certainly is! Here are 79 marvellous minutes that draw on the abundant reserves of Side Effect's three Fantasy albums - originally released during the halcyon era of jazz-funk, 1975-77 - and that don't miss a single highlight of the group's two years with that company. Even if you have the aforementioned CD release, there's more than enough otherwise-unavailable material here to warrant your further investigation of this one, too...

Side Effect originally came together in 1972, but didn't really hit their stride until they signed to Fantasy via Crusaders' trombonist Wayne Henderson's At Home Productions. Led by Augie Johnson, the three-man nucleus of Johnson, Louis Patton and astounding high tenor Gregory Matta was augmented by a variety of strong female leads during its Fantasy years, among them sometime Motown starlet Sylvia St James and future Gospel grand dame Helen (Lowe) Baylor.

Adept at vocalese (check out their revival of Jon Hendricks' Cloudburst) and under-rated masters of soul group harmony (try She's A Lady, or Matta's mindblowing vocal showcase I Like Dreaming), there wasn't much - if anything at all - that Side Effect couldn't sing the pants off.

I've tried to include as many of their slowies as would fit, as I believe that they fully deserve the wider audience that was largely denied them at the time due to the group's reputation as masters of the upbeat. Nevertheless, it was the dance cuts that forged Side Effect's reputation for exciting vocal interchange and impeccable grooviness - and how invigorating they still sound, thanks in no small part to the magnificent instrumental work of the West Coast "A" list musicians of the day, among them James Gadson on drums, Ray Parker Jr on guitar, Sonny Burke on keyboards, and 'boneman supreme Henderson blowing freely as well as manning the mixing board throughout! Everyone out there with even a passing interest in this kind of music will know and revere the group's classic vocal takes on Ronnie Laws' Always There and the Crusaders' Keep That Same Old Feeling. You may not, however, be as familiar with their short, sharp cover of Ebony Rhythm Funk Campaign's Oh Baby or the smooth strut of another Laws composition, Never Be The Same, but it won't be too long before both figure in your priority playlist alongside other Side Effect floorfillers like Keep On Keepin' On and the Lowe-Baylor-led SOS...

Speaking once more as that long-time Side Effect fan, I'm personally delighted that all this great music is now available again, on both CD and limited edition double vinyl (and, in many cases, for the first time in over 20 years!). Records of this kind really don't get a whole lot better than IN FULL EFFECT, but then if you're reading these words you probably won't need to be told that...

Celebrate the soul cause - enjoy the 'Effect'!