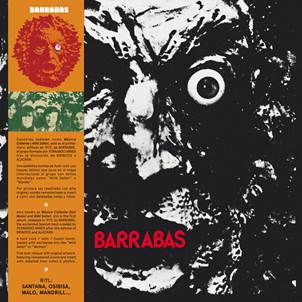 4. Never In This World

3. Rock And Roll Everybody –

Also known as “Música Caliente (Hot Music)” and  “Wild Safari”, this is the first album, released in 1972, by BARRABÁS, the acclaimed Spanish band created by FERNANDO ARBEX after the demise of BRINCOS and ALACRÁN.

Barrabás was created by Spanish genius drummer, songwriter and producer Fernando Arbex after the split of his post-Brincos power-trio Alacrán. Busy with his productions and as songwriter for many artists, Fernando still had in mind the desire of international success. Highly influenced by the beginnings of funk music and the Latin-rock of groups such as Santana (influences that were also already present on Alacrán), Arbex formed Barrabás along with his Brincos bandmates Miguel & Ricky Morales on guitars, ace keyboard player Joao Antonio Vidal (from Madrid based psych band Los Grimm), Afro-cuban percussionist & multi-instrumentalist Ernesto “Tito” Duarte and Iñaki Egaña (Los Buenos, Alacrán…) on vocals/bass. The name of Barrabás came after Fernando watched the movie of the same name by Richard Fleischer.

In 1971, the band entered RCA Studios in Madrid for the recording of their first album, sung completely in English. The result was a fabulous mix of funk, Latin music, rock and afro sounds, housed in a striking cover designed by famous Spanish singer-songwriter Luis Eduardo Aute. Songs like “Wild Safari” or “Woman” took the international dance floors by storm, even reaching the first positions in the US Black Music charts, being championed by legendary DJs like David Mancuso (The Loft). The album also contained surprises like the mid-tempo “Cheer Up” or the Canned Heat sounding boogie rock of “Rock and Roll Everybody”.

A groundbreaking debut album, essential to understand the roots of Spanish funk-rock, reissued for the first time on vinyl faithful to the original one.