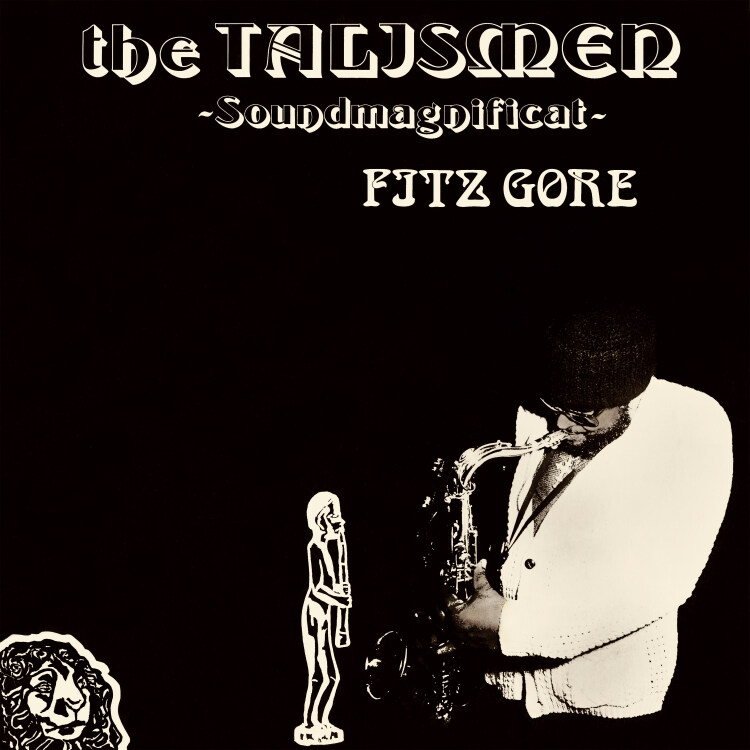 Deep spiritual jazz recorded in Germany, performed by Jamaican born saxophone player Fitz Gore and his international group The Talismen, featuring a.o. bassist Gérard Ebbo from Morocco and drummer Philippe Zobda-Quitman from Martinique. This is the first reissue of their second album, released in 1976 by the small private label GorBra from Bonn, including “Delilah” and “Requiem For Julian Cannonball Adderley”. The rare LP comes in a newly mastered version with original cover design and sleeve notes. Fitz Gore`s music is full of tremendous tension and movement between deep seriousness, inwardness and humility; it affects your life, it liberates and heals.

„Soundmagnificat“ is the successor to „Soundnitia“ (GorBra Records F 665 532), the first release from the Talismen, an international group with Jamaican Tenor saxophonist Fitz Gore (born1935) as founder, spiritual and musical leader, main soloist. „Soundnitia“ contained concert performances of June, 1975, including compositions by John Coltrane, Horace Silver and one by Gérard „Prof. Dr. Splüm“ Ebbo, bassist of the Talismen.

This second offering from the Talismen is more varied. It has four tracks recorded at four different occasions. It presents Fitz Gore as a singer, a composer, as well as, a tenor saxophonist. The opener, Requiem for Julian „Cannonball“ Adderley, is a moving tribute to a great American artist, the late alto saxophonist „Cannonball“ Adderley. On this track, Hungarian drummer Janos Sudy is heard with the Talismen, for the first time. The playing by the quartet on this slow lament very adequately illustrates the mood of the composition

For the next piece, a concert performance, Gore selected a gem from the American Negro Song Tradition and he displays a mighty, masculine and soulful voice in Steal Away. An example of a modern artist using an old traditional to express his own inner feelings. Delilah is taken from another concert performance, the same concert as the music on „Soundnitia“. It has extensive playing by Gore, a bass solo by Gérard Ebbo, leading into some exciting conga playing by Lamont Hampton.

The final track, A Sinner Kissed An Angel, was recorded by another tenor player, Wardell Gray, in 1950, but this version is all Gore`s. After the piano introduction, Gore delivers the melody with authority and with an expressive use especially of the high register of his instrument. In his improvisation, Gore`s playing becomes more dissonant. Some of his playing here causes me to think of the way the late Albert Ayler sounded on his first recordings done in Sweden, in the beginning of the 60s. No drums here, but nice accompaniment and solo work of Jochen Paul on vibes.

I met Fitz Gore in Copenhagen in the fall of 1975. We were both listening to the trumpet playing of Harry „Sweets“ Edison at the now defunct Café Montmartre. Prior to that time, I did not know Gore and his music, but listening to his playing on this album and the earlier one, has once more widened my musical horizon. His music has struck some chords within me. „Music is communication“, John Coltrane once said. I feel sure that as you listen to the music of Fitz Gore and his Talismen, you will get the message.

In these notes, I have mentioned a couple of jazz artists and another one ought to be named primarily, because he has meant a lot to Gore: Sonny Rollins. The two met in Paris in 1966. Gore says of Rollins: „He openend my eyes ...big man … phenomenon … my man“. As Sonny Rollins`s artistry, the music of Fitz Gore holds many aspects, some being aggressive and even hysterical, others being those of beauty and peace. As life itself … (Roland Baggenaes, June 1976)

The music of Fitz Gore, rooted in the blues, is full of tremendous tension and movement between deep seriousness, inwardness, humility and humor, hardness and tenderness; it affects your life, it liberates and heals - a hopeful, a truly groundbreaking, a timeless, a new music - Newsic!

In memory of Fitz Gore.