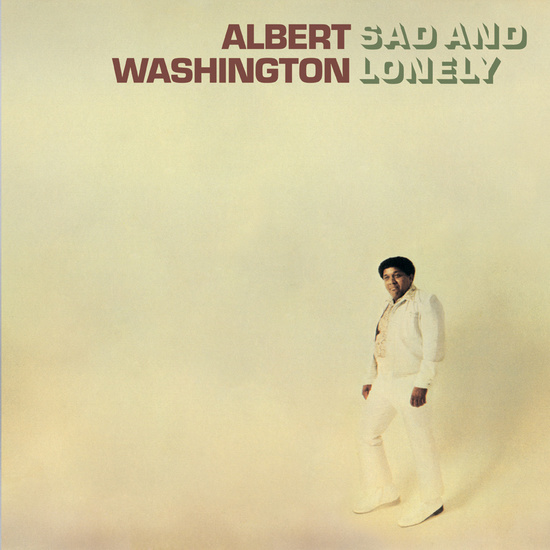 By the time singer-songwriter Albert Washington went to record the tracks that would be released on his career-defining LP, Sad and Lonely, in 1973, he was already a veteran on the recording scene. He had singles recorded on a dozen labels, in styles ranging from gospel to blues and soul. Washington (born in Georgia, 1939) made his own guitar out of a gasoline can using rubber bands as strings at the age of seven. After the family moved to Cincinnati, Albert started going to clubs in the area where he was exposed to artists from the likes of B.B. King and Sam Cooke who would inspire him to become a performer.

By the mid 1960’s, Washington had started his recording career, cutting several singles for various labels. His 1964 recordings for the VLM label, including the song he wrote called ‘Haven't Got a Friend’, got him noticed in England, and this in turn led to a deal with Fraternity Records in 1966. Lonnie Mack later joined Washington on several singles for Fraternity recorded in 1969. In 1970, he released two singles on the Jewel label before finally recording his first LP (Sad and Lonely) for the Detroit-based label ‘Eastbound Records’ in 1973.

Recorded with the Memphis Horns, the tracks on Sad and Lonely are prime southern gospel-infected soul, funk and raw Albert King style blues…bearing the heavy influence of both James Brown’s funk and Otis Redding’s Memphis soul. Albert’s music is full of lament, urban hustle and lost love, the precise guitar strokes alongside Washington's soaring vocals create the mood for the blues to invade the funk parts. The female backup singers’ harmonies are the cherry on top and the album is a funky emotional onslaught with relentless dance grooves from start to end. The outpour of talent featured here on ‘Sad and Lonely’ was carefully produced by Bernie Mendelson (Donald Austin, Melvin Sparks, Ceasar Frazier), engineered by Ronnie Capone (Stax) and then mastered by the legendary Howard Craft.

Because of complications from diabetes (Washington lost his sight and went completely blind) he had to put his musical career on and off hiatus…but despite the crippling effects and the tragedies that befell him over the course of his life, Albert remained an upbeat, positive figure. Washington continued to perform in blues clubs around Long Island prior to dying of complications from diabetes on October 23, 1998.

‘Sad and Lonely’ was originally released on Eastbound (whose parent label Westbound had hitmakers such as Funkadelic & the Ohio Players on its roster in 1973). This rare album has now attained a cult status and fetches hefty sums on the collectors-market. Now it’s finally back available as a limited deluxe 180g vinyl edition (1000 copies) featuring the original artwork. Released exclusively for Record Store Day (UK & Europe) 2019, available in participating stores on April 13.