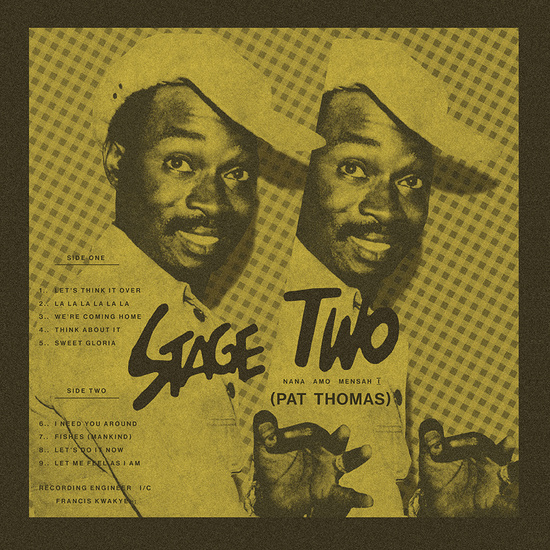 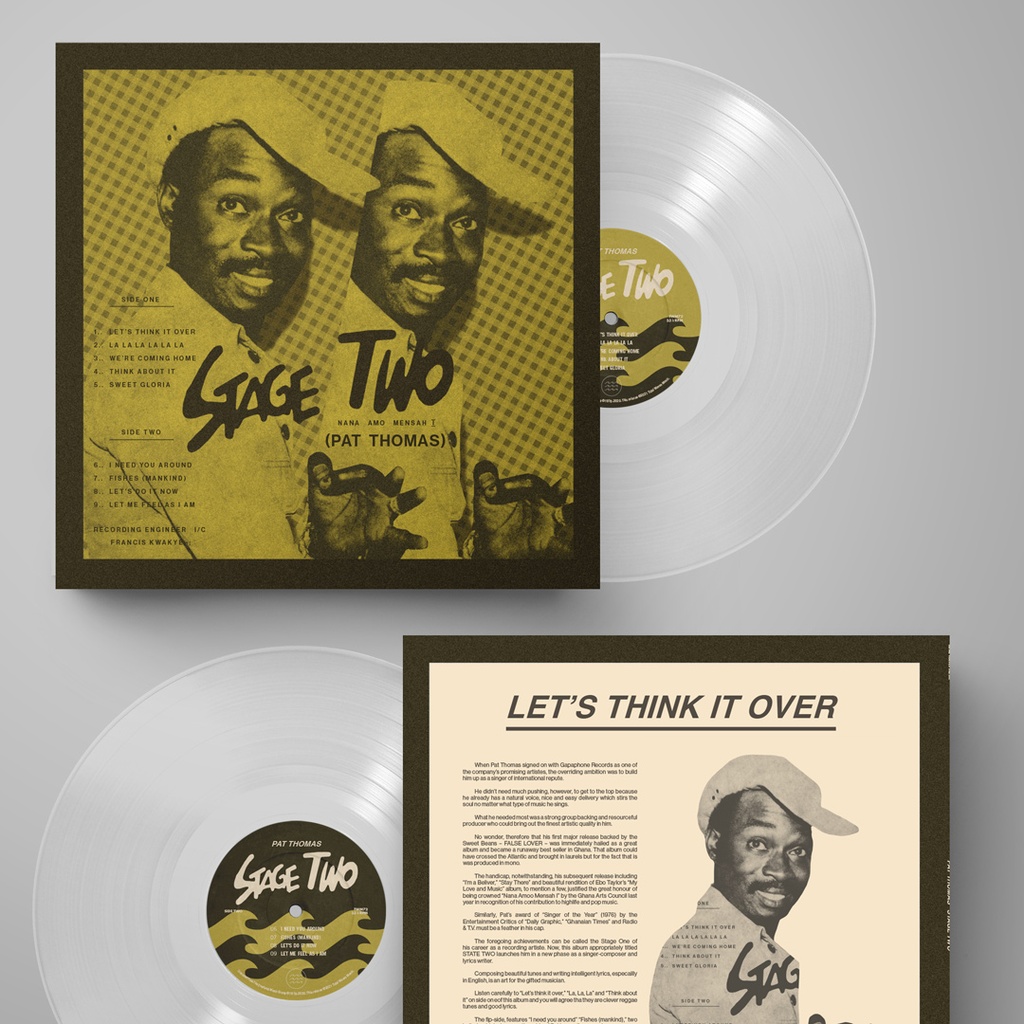 A1 Let's Think It Over

A3 We Are Coming Home

A4 Think About It

B1 I Need You Around

First ever release outside of the African continent

The legendary Ghanaian singer-producer Pat Thomas needs little introduction, he is a globally recognized vocalist and songwriter, famed for both his solo works and that with the highlife bands The Blue Monks, Broadway-Stargazers Dance Band, The Satellites, The Sweet Beans, Marijata, The Kwashibu Area Band and The Uhuru Dance Band. Between 1974 and 2019, he issued more than two dozen recordings offering a unique take on highlife, funk, reggae, soul and Afro-beat/pop. Pat Thomas’ work was sampled many times and continues to be featured on compilations by renowned reissue-labels across the globe.

Born in 1946 in Agona (in the Ashanti region) as Kwabena Nyamekye Amoo-Mensah, Pat Thomas almost literally had music in his DNA: his father was a music theory teacher and his mother worked as a bandleader. His uncle was none other than legendary Ghanaian guitarist King Onyina, who was not only renowned for his own recordings, but for his performing work with Nat King Cole, Miriam Makeba, Ray Charles and Ella Fitzgerald. Thomas went to live with his uncle where he learned musical notation, began to study guitar and play drums. He became a notable composer, and as a teenager, quickly established a reputation in the local club scene as a singer.

In the early Seventies, he moved to Accra to join Ebo Taylor’s legendary highlife band The Blue Monks (their residency at the Tip Toe Nite Club is an important part of Ghanaian musical history). Pat Thomas left Taylor’s band (though their friendship and their musical association continued) and moved to the Ivory Coast in 1973, where he formed The Satellites. The band was short-lived but they did record a few singles. In 1974, he formed The Sweet Beans (which also featured Ebo Taylor in some of its incarnations) and started to cut several albums for the Ghanaian label Gapophone Records between 1974 and 1980. Soon, his singles started to become major radio-DJ favorites.

1976 turned into Pat Thomas’ busiest year…this was the year that he released his most-famed works: the “Stay There”, “Pat Thomas Introduces Marijata” and “Stage Two” albums! Marijata was a notable funky Ghanaian group (who had their own unique identity) that started to back Thomas’ on several of his classic albums.

In 1978, he was voted “Mr. Golden Voice of Africa” and in the first half of the Eighties he started issuing his well-known ‘Action’ album series…here his musical vision got broader and Thomas started to include Afro-Latin sounds & funky African disco parallel to his already signature Afrobeat-Afropop sound. It was also during this period that he moved to London to record several of his own albums and collaborations with other artists. Pat Thomas was restless…he moved and played all over Europe for the next years, recording for a series of labels. In 1990 he moved to Canada where he began teaching in addition to playing and recording (his 1991 album “Sika Ye Mogya” on Fire Records won the Album of the Year award in Ghana).

Pat Thomas remains active as a performer and recording artist in the 21st century and currently resides in Ghana, where he resumed his teaching career and plays across the African continent, making occasional forays to Europe.

The album we are presenting you today (Stage Two from 1976) comes swinging right out the gate with a set of nine monster tunes, heavy drum-breaks, reggae infused afro-beats, funky bass lines, Wah-wah-psyche guitars and lyrics that straddle between a sense of melancholy and frantic urgency. This is a quintessential Pat Thomas (backed by the Marijata band) record that every serious collector or fan needs to have in his collection.

Originally released in 1976 on Gapophone Records Ghana, Tidal Waves Music now proudly presents the first official reissue of this rare album (original copies tend to go for LARGE amounts on the secondary market…that is if you’re lucky enough to come across one). This is also the FIRST time Stage Two is being released outside of the African continent. This North American vinyl version is limited to 500 copies on 180g Clear Vinyl and also comes with an obi strip.