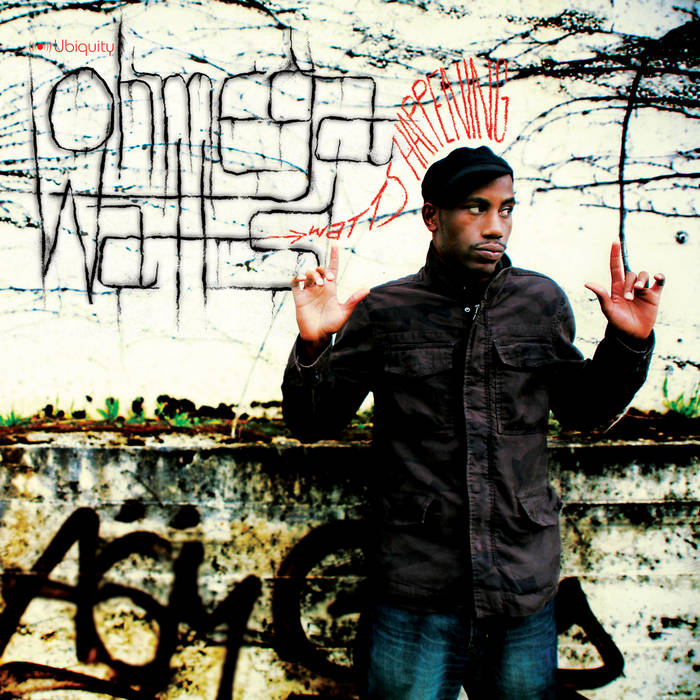 A1 What's It Worth

B1 Few And Far Between

B2 Eyes And Ears

B3 Roc The Bells

C2 (Interlude: 'A Teaspoon Of Sugar')

C3 Are You Satisfied

D6 Gone With The Wind

While the eclecticism of his debut album The Find won him many fans, Watts Happening pushes the envelope to reveal even more about MC/producer Ohmega Watts and continues to challenge the expectations of what a rap album could be. The record includes collaborations with lauded Philly-based MC/producer Jneiro Jarel and up n’coming Brazilian vocalist Tita Lima who appears on the DJ-friendly Brazilian-tinged excursion “Adaptacao.” Watts wrote “Are You Satisfied” for Bay Area blues n’funkstress, and one of James Brown’s favorite female vocalists Sugarpie Desanto, inspired by recent losses she suffered in a tragic fire at her Oakland home. London instrumentalist, and label mate, Shawn Lee also provides some key sounds from his over-stocked studio. The album includes features from favorite Watts cohorts like the Lightheaded crew, Triple Grip and Theory Hazit.

Ohmega Watts has a wide-eyed, all-encompassing, set of musical influences that range from the more obvious soul and funk tunes, to being a big fan of Stereolab and Broadcast, psychedelic Brazilian sounds, to music by UK producers like Quantic and Mr Scruff. As such Watts Happening follows on from his debut album, The Find, exploring and presenting a multitude of beats, rhythms, and styles. With The Find he threaded these sounds together for the first time and his popularity grew organically from a virtually-unknown MC to one who has performed all over the USA including dates like Lollapalooza and Bumbershoot with Lyrics Born and The Greyboy Allstars. He has headlined the MusicFest NW show, and played dates with Breakestra, The Coup, Lifesavas, De La Soul, Blackalicious, RJD2, Michael Franti and Spearhead, Masta Killa, and Count Bass D. In addition he has toured throughout Europe and Japan.

Rolling Stone described his album as being full of “Funky soul and razor-sharp dance-floor cuts,” and continued, “this is hip-hop that everyone - not just fans of the genre - can enjoy". Cutting edge UK mag Dazed & Confused described him as “One of the freshest talents to have emerged out of hip-hop's leftfield in the last five years.” And The Source added, “Ohmega takes it back to when it was only about beats and rhymes, when Jam Master Jay was more than a memory and the culture had harmony."

Since recording The Find he has appeared on records by Galactic, Shawn Lee, Quantic, Connie Price and the Keystones, and Australian act The Bamboos.

On Watts Happening there’s a handful of party-pleasing dance-floor fillers in all different shapes and sizes including the hard-hitting Afrobeat drum-powered “The Platypus Strut” which was made with a cast of musicians from the red-hot LA funk and soul scene like Miles Tackett on guitar (Breakestra) and Todd Simon on horns and flute (The Lions, Connie Price, Antibalas etc). The space-funk of “Work For Wealth” featuring fellow-Portland-based musicians Ragen and Barry of Triple Grip, and rap cuts like “Eyes and Ears” and “Triple Double” will also keep the DJs happy. There are also mellow or thought-provoking tunes like “No Delay,” inspired by the movies Born Into Brothels and Boys of Baraka, “Found” addressing a Watts’ religious transformations and “Gone With The Wind” which opens with a tasty jazz drum lick.