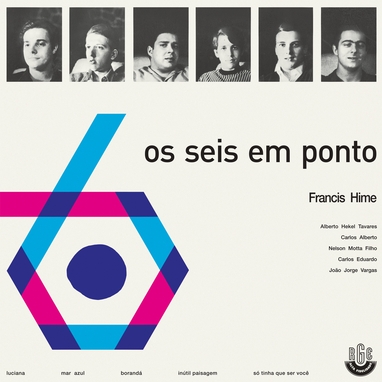 A1 Samba Do Carioca

Francis Hime has been a fundamental artist of Brazilian music since the mid-1960s. He began to play the piano when he was only six years old and in 1963 he started working with Vinicius de Moraes, with whom he would compose many songs. For example, ‘Sem mais adeus’, included in “Os Seis Em Ponto”, his first album as part of the band of the same name, released in 1964 on the prestigious RGE label.Hime’s rhythmic piano swings between bossa and jazz along the entire record, with the typical groove of the then emerging Brazilian sound and the characteristic arrangements and solos of the American jazz genre. The complexity of the instrumentation present on the album already anticipates what would be the pianist’s later career as arranger and director of orchestras. But the instrumental depth does not diminish the infectious groove of many of the tracks on the album, a wonderful repertoire by such solid composers as Carlos Lyra, Roberto Menescal or Castro Neves, as well as absolute legends like Vinicius, Jobim or Edu Lobo.“Os Seis Em Ponto” is a representative record from the time of its making: the golden age of bossa jazz, full of sweet and luminous melodies, but also of energetic moments in which Francis Hime’s piano receives the brilliant backing of the flute and the trombone, or the effective guitar of Nelson Motta. Despite the young age of the whole band, their instrumental skills are beyond any doubt and this is proven by the masterful performances not only of the many classics contained in the album but also of Hime’s original compositions. Among the most notable cuts on the LP are ‘Mar azul’, ‘Se você pensar’, ‘Sem mais adeus’, ‘A paz de um homem so’, ‘Amor a Êsmo’ and ‘Borandá’.