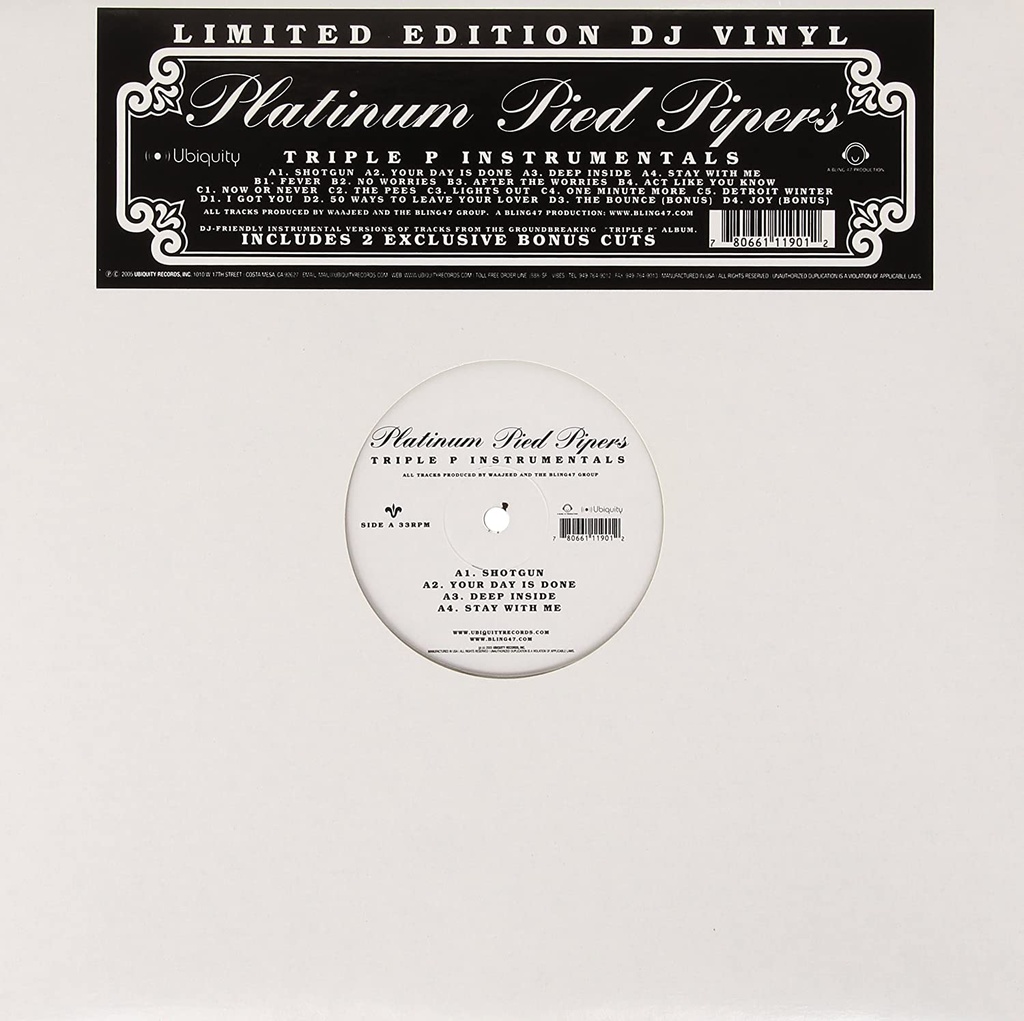 A2 Your Day Is Done

A4 Stay With Me

B3 After The Worries

D2 50 Ways To Leave Your Lover

The funny thing about Platinum Pied Pipers is that they're neither platinum nor much like the self-proclaimed pied piper of R&B, R. Kelly. They're underground, no larger than life, yet wholly contemporary -- a pair of Detroit producers who introduced their way of doing things with interpretations of Burt Bacharach's pop staple "The Look of Love" (sounding more like a Cameo tape after being rescued from a puddle) and Faze-O's rare-groove classic "Riding High" (relatively straightforward, as easy as a summer afternoon spent in the back seat of a convertible). These and other cuts appeared on Ubiquity's Rewind! series of compilations. They built up a lot of promise, all of which is fulfilled on the duo's first album. Slum Village vet Waajeed and Barrett Strong protégé Saadiq conduct Triple P Quincy Jones-style, appearing on the cover while otherwise remaining in the background. With help from a handful of MCs and vocalists, the producers/musicians cook up a varied array of hybridized backdrops that update 30 years of soul, hip-hop, and crossover jazz. Three songs featuring the honey-voiced Tiombe Lockhart are among the top highlights; "I Got You" is the best of that lot, with Lockhart, horns, organ, electric piano, and guitar slinking and winding around one of Waajeed's crisply snapping beats. A collaboration with the Sa-Ra crew, "Deep Inside," is wonderfully freaky, a rugged stomp and a smooth glide at once. Out of the MC-led tracks, which tend to be outshined by the ones featuring vocalists, Invincible's "Detroit Winter" stands out most: "Detroit in the winter, the cold is a poison that lingers/A point for beginners: to hold on, avoiding the shivers/You either bundle up or burn rubber/But if you can't take the winter, you don't deserve summer." Many tails can be chased drawing easy parallels to the past, but the only obvious references on this album to the good old days of soul music are some crowd chatter -- likely a nod to Marvin Gaye's What's Going On and "Got to Give It Up" -- and a whole lot of spirit.